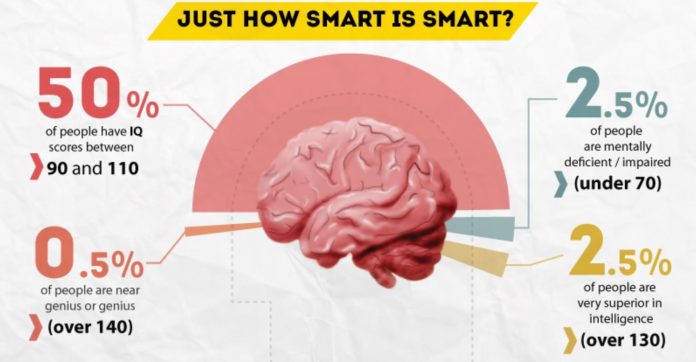 Call them geeks, nerds or super sharp intellectuals – these 10 smart geniuses have brightest minds in the world…

With an outstanding IQ of 230, Terence Tao, 42, was teaching 5-year-olds how to spell and how to add numbers – he was 2. When he was merely 10, he began participating in International Mathematical Olympiads and won a bronze in 1986, silver in 1987 and gold in 1988, becoming the youngest ever gold medalist in the Mathematical Olympiad. By the time he was 16, he had earned his Bachelor’s and Master’s degree – he got his Ph.D. at 20. This American cosmologist and astrophysicist is all of 35 and has a verified IQ of 225! At 13, he received a gold medal at the International Physics Olympiad, at 14 he began his university education at the Caltech University, at 16 he was working with NASA exploring the possibility of colonizing Mars, and at 22, he got his Ph.D. from Princeton. Kim Ung-Yong, 55, has more brain power than Hawking and Einstein – he booked a place for himself in The Guinness Book of World Records with an IQ of 210! Kim began speaking when he was barely four months young, at 2 he was reading Japanese, Korean, German and English, at 3 he was taking courses as a guest physics student at Hanyang University, and at 8 he was invited by NASA to study in the United States. 65-year-old American autodidact, known as the smartest man in America, has an IQ reported to be between 195 and 210. Langan scored a perfect score in SAT even thought he slept his way through the exam. This genius has developed a theory of the relationship between mind and reality which he calls the “Cognitive-Theoretic Model of the Universe”. American TV writer Rick Rosner, 57, the world’s fifth-smartest man, has been a stripper, roller-skating waiter, bouncer, and nude model. He pops 50 pills including Omega 3 fish oil capsules, a baby Aspirin, Metformin, Metoprolol, Glisodin and Avodart to maintain his IQ of 192 and remain smarter! The Russian Chess Wizard and the youngest ever undisputed World Chess Champion at 22, Garry Kasparov, 54, has an IQ of 190. Kasparov, who holds the record for consecutive professional tournament victories (15) and Chess Oscars (11), formed the United Civil Front movement to oppose Russian President Vladimir Putin’s policies. The award-winning English mathematician cracked the 358-year-old Fermat’s Last Theorem, listed by The Guinness Book of World Records as one of the world’s “most difficult mathematical problems”, in 1995. Knighted for his contributions to mathematics, Wiles, 64, has received 15 awards including an International Mathematic Union silver plaque, The Shaw Prize, and a National Academy of Sciences Award in Mathematics. He has an IQ of 170. Microsoft co-founder Paul Allen, 64, has an IQ of 170. According to Forbes, Allen is worth $17.5 billion, which makes him the 51st richest person on the planet. He owns NFL’s Seahawks and NBA’s Portland Trail Blazers and has donated more than $1.8 billion so far towards the advancement of science, technology, education, wildlife conservation, and community services. Theoretical physicist, cosmologist, and an author, Stephen Hawking, 75, has an incredible IQ of 160 making him at par with Albert Einstein. Even though he suffers from a rare form of amyotrophic lateral sclerosis (ALS) that has gradually paralysed him and has survived more years than he was expected to, the astrophysicist has made a name for himself through his theories on black holes.