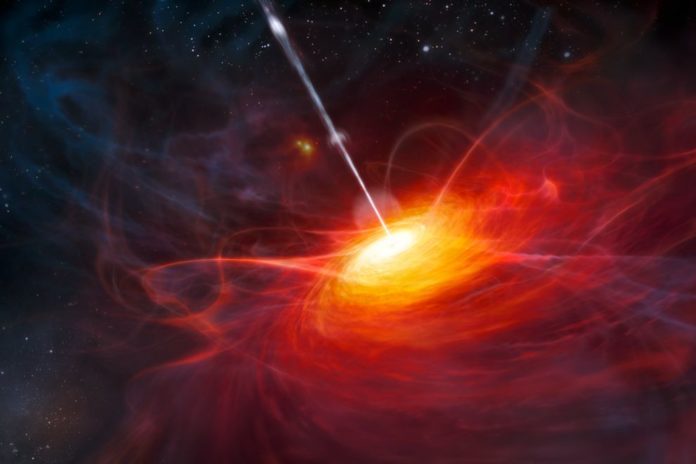 If you Google the phrase, ‘weight of the sun,’ this is what comes up: 1.989E30 kg (Sun, Mass). Now combine twelve billion of these suns and the result is the discovery of a new black hole. That’s right, astronomers claim to have identified an enormous black hole having the mass of twelve billion suns! Even more surprising is that even with the mass of twelve billion suns, it is NOT the biggest one! This black hole is still young and when measured from one end, it has grown only eight hundred and seventy five million years, that is, after the ‘big bang’ occurred; our universe has grown only six percent at its current age. It came as a surprise to scientists that massive black holes grow very slowly. “Giant black holes are thought to grow relatively slowly by vacuuming up gasses and even stars that venture too close.” Curiosity is driving Xue Bing Wu of China’s Peking University, crazy, “How do you build such a big black hole in such a short time?”

Due to their high gravitational pull, a pull powerful enough to envelope light, black holes in general are not visible to the naked eye. That is why Wu and his work mates were not able to see the massive ‘puller’ directly. The team collaborated with people using telescopes in Hawaii, Arizona, Chile and China to spot the quasar – a quasar is glowing gas that forms in a beam-type direction, squeezing itself into the black hole as displayed on this articles header photo.

As much as Wu and team are excited, scientists from around the world also can’t get enough the newly discovered black hole. “This is the biggest monster we have ever detected in terms of luminosity. It is about forty thousand times as bright as our entire Milky Way galaxy,” says Avi Loeb, head of the Harvard Astronomy Dept. (he was not involved in the research). Image Source: National Geographic / Illustration by Zhauyu Li, Shahghai Astronomical Observatory – A giant black hole weighing as much as 12 billion suns was found inside a quasar, a bright astronomical body like the one illustrated here with a black hole at its center.

Almost all galaxies, including ours, have gigantic black holes at their center and huge amounts of super-heated gasses surrounding them, they are also known as quasars. But the newly discovered ‘SDSS J010013.02+280225.8’ is perhaps a whole different game; it is extreme.

Like all quasars, it makes an entire galaxy look like an ordinary one; like just another ray of light beaming in the middle and a cluster spinning around it. It was only when the scientists analyzed it in greater detail that they were able to realize its speed and the rate at which it was moving away from Earth. In an expanding universe, the most distant objects fly apart from each other at their fastest. Given that information, the light from the quasar has been on its way to Earth for about 12 billion years.

However, the quasars massive illumination speaks to the astronomers about its powerful, heated gas; which furthermore tells them how big the hidden black hole is. Wu states that they were only able to discover the quasars, not knowing the ultimate size of the black hole. “But none of them has a mass of more than three billion times that of the sun,” says Wu.

Scientist believe that this black hole came into being when the 1st stars in the universe burned through their nuclear fuel and collapsed, forming the black hole; much like trillions of atomic bomb explosions. Those first stars were massive themselves. “Galaxies were up to a thousand times the density that they are today, so they were tightly packed cores [and] would have provided a lot of gas to feed the black holes, allowing them to swell up,” says Wu.

But this does not always work for newly discovered black holes. “It must have been accreting gas at close to the maximum rate for most of its existence,” says Bram Venemans of the Max Planck Institute for Astronomy in Heidelberg, Germany. In short, that is considered implausible because the blast of light from a quasar tends to throw away nearby gas.

Apart from this, there is another theory stating that two or more galaxies possibly collided with each other, merging the back holes of different galaxies into one. Otherwise, the imbalance would throw the new single black hole aside. “So far, roughly 40 quasars with red shift greater than z = 6 have been discovered. Each quasar contains a black hole with a mass of about one billion solar masses (109 MO). The existence of such black holes when the universe was less than one billion years old presents substantial challenges to theories of the formation and growth of black holes and the co evolution of black holes and galaxies. Here we report the discovery of an ultra luminous quasar, SDSS J010013.02+280225.8, at redshift z = 6.30. It has an optical and near-infrared luminosity a few times greater than those of previously known z > 6 quasars. On the basis of the deep absorption trough on the blue side of the Lyman-α emission line in the spectrum, we estimate the proper size of the ionized proximity zone associated with the quasar to be about 26 million light years, larger than found with other z > 6.1 quasars with lower luminosities. We estimate (on the basis of a near-infrared spectrum) that the black hole has a mass of ~1.2 × 1010, which is consistent with the 1.3 × 1010 derived by assuming an Eddington limited accretion rate.”

If just a few such stars were born and then died in the early universe, this leads to a theory that they could jump start the formation of very large black holes. However, the only problem with this theory is that the scientists are not sure that millions of solar mass stars ever existed. Wu says that the James Webb Space Telescope will go into orbit in 2018 and, “we just might be able to discover the unseen.”