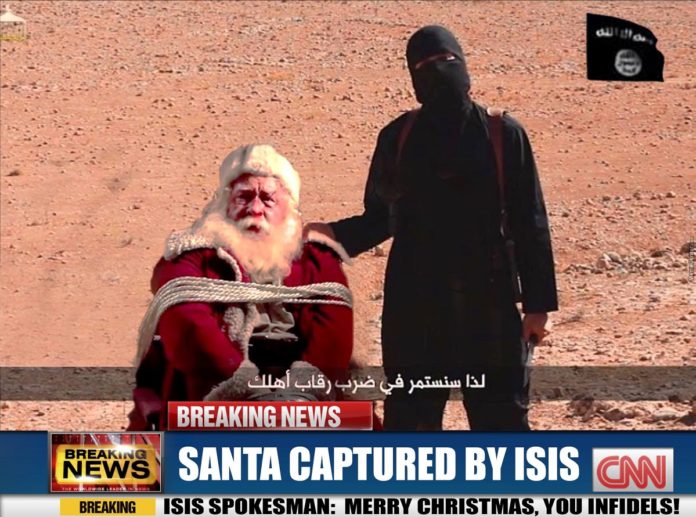 Guided by talking heads, American armchair warriors spout vitriol, increasingly calling to either treat Muslims like Jews in the Third Reich or simply bomb them into oblivion — and their cognitive dissonance is glaring. These contradictions are evident not least in the paralyzing fear so many ‘Mericans feel toward Muslims who courageously call for soldiers to do their bidding in the Middle East. Their crippling fear of Islamic terror, itself, is cloaked in contradiction.

According to an analysis by the New America Foundation, Islamic terror attacks in the United States have led to the deaths of 45 people since 9/11. While 45 deaths is 45 too many, the dizzying fear of Islamic extremism currently sweeping the nation is objectively overblown.

Considering Islamic terror killing an average of 3.2 Americans per year (45 deaths divided by 14 years) since late 2001, here are ten causes of death more worthy of their fear:

1. Television: TV might be linked to earlier deaths among those who watch more than a few hours a day, but more concretely, the devices themselves kill 176 people a year. Literally. They fall on people. That’s 55 times more deaths than Islamic terror claims annually.

2. Fireworks: According to the Consumer Product Safety Commission, celebrating the 4th of July might be more deadly than Islamic terror attacks. The organization reports an average of 7.1 deaths per year — meaning Americans are more likely to blow themselves up than be eviscerated by the jihadist bombers they so fear.

3. Cows: Yes, cows. According to the CDC, cattle slay an average of 20 Americans every year. While these deaths occur mostly among farm workers, dogs kill 28 Americans per year, spiders kill seven, and venomous lizards and snakes kill six. All of these animals are still more likely to kill an American than the caliphate and other Islamic boogeymen.

4. Elevators: While the fear of dying as a result of an elevator malfunction has probably plagued many Americans at one time or another, such a worry is likely fleeting. However, if Americans are truly concerned with “common sense,” a virtue Donald Trump frequently touts, they would do well to readjust their phobias. Elevators kill 27 Americans per year, according to the U.S. Bureau of Labor Statistics and the Consumer Product Safety Commission.

5. Choking: Americans will sooner perish from choking on food or other objects than from an Islamic terror attack. At least 2,500 people per year are killed by this type of asphyxiation — 781 times more than from a jihadi assault. Hot dogs are particularly menacing. Perhaps we should ban them in the same vein as Trump’s proposed ban on Muslims. Then again, killing fewer cows to grind up for beef dogs might lead to an uptick in cattle-on-human violence. America is at a perilous crossroads.

6. Lightning: People often quip that one is “more likely to be struck by lightning” when they want to highlight an event’s improbability. However, even as the number of deaths from lightning decreases over the long-term, it is still higher than the number of people killed by Muslim terror attacks each year. Forty-nine people per year die from being struck by lightning — more than 15 times the rate of death from Islamic extremist murders.

7. Car accidents: Though most Americans are aware of the high risk of death by car accident, this knowledge doesn’t mitigate their extreme Islamophobia. The Association for Safe International Road Travel estimates about 37,000 Americans die each year in vehicular accidents, over 11,562 times the number killed by Muslim fanatics.

8. Heart Attacks: Heart attacks are one of America’s leading killers, claiming 190,625 times more American lives than Islamic terror. 610,000 Americans die from heart attacks per year. Cancer kills 589,430 Americans annually, and diabetes is the main cause of death for 69,071 Americans per year. They are responsible for astronomically more fatalities than radical Islamic terror.

9. Police: According to a three-year average of American police killings logged by killedbypolice.net — a more comprehensive database than the federal government’s — police killed 998 people on average per year from 2013-2015. That’s roughly 312 times the average annual number of people killed by Islamic extremists since 9/11. The average number of people killed by Islamic terrorism in the last three years is 7.7 — including the recent shooting in San Bernardino — and by that parallel measure, police are still about 130 times deadlier than terrorists.

10. Prescription Painkillers: The CDC estimates that 44 people die per day from overdosing on pharmaceutical painkillers. Never mind that that number is almost 14 times the number of Americans killed by Islamic terrorism each year. Based on the CDC’s figure, about 16,060 Americans die annually from painkillers — making the Big-Pharma money-makers 5,019 times more deadly than the Islamic terror that has Americans trembling whilst hiding under their blankies.

Other notable risks of death greater than an Islamic terror attack include scalding tap water, which kills 100 American per year; bad medical care, estimated to be responsible for at least 100,000 deaths in the U.S. annually; and hypothermia, which kills 1,340 Americans per year. Oh, and don’t forget Christmas trees. Fires caused by Christmas trees kill roughly ten people every year. Are Christmas trees conspiring with their lights to traitorously wage war on Christians via suicidal self-combustion?

While the Washington Post has previously cautioned against making comparisons between events that inherently cause death (for example, a terror attack) and events that may cause death (like driving a car or riding in an elevator), it remains that being caught in the throes of a terror attack is just as coincidental a fate as choking — or rather, less coincidental, based on the data. One could die from a terror attack at an office building, but they could also die from an elevator accident in the same location.

Either way, many of the most pervasive forms of death — like heart attacks, cancer, and painkiller overdoses — are preventable, at least in part, through lifestyle choices. If Americans were as passionate about ending these killers as they are about battling ostensible Islamic terror, millions of lives might be saved.

If Americans’ fear of death were rooted in data and objectivity, they might drop their calls to ban Muslims. The recent rash of attacks against peaceful Muslims might wane. Eighty-three percent of registered voters might not fear an inevitable terror attack. A majority of Americans might not call for further military escapades in the Middle East, which will most assuredly kill countless innocent civilians — all so the ‘free and the brave’ can do their Christmas shopping sans an irrational fear of being blown up at the mall (though previous invasions have done little to quell that panic).

Rather, Americans might consider changing many elements of their everyday lives. They might alter their diets to reduce heart attacks, tackle their addictions to pharmaceuticals, remove their televisions from their homes, and, er, avoid the dangerous bovine masses they have come to resemble so closely.

This article (10 Things More Likely to Kill You than Islamic Terror) is free and open source. You have permission to republish this article under a Creative Commons license with attribution to Carey Wedler and theAntiMedia.org. Anti-Media Radio airs weeknights at 11pm Eastern/8pm Pacific. If you spot a typo, email [email protected].