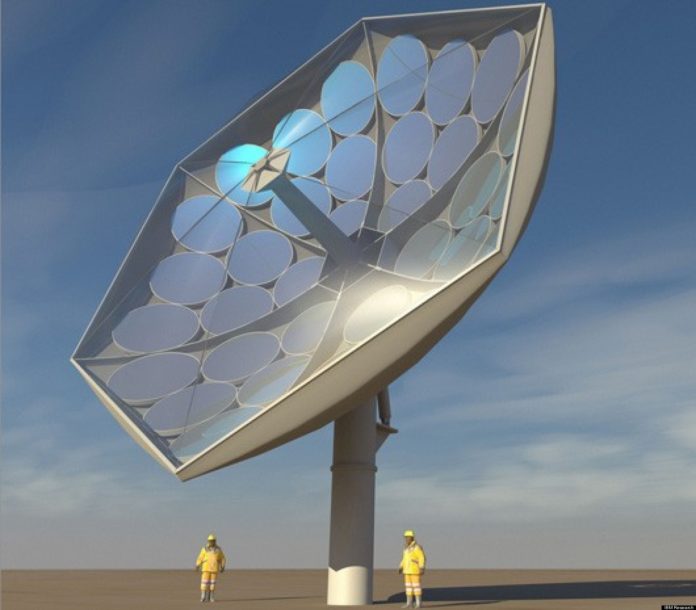 Solar power, has long been the unicorn many chase as the solution to our world’s need for electricity. Can you blame them? On a regular basis, our sun gives out more wattage than can possibly be described. If you want to try to write it down, it would be right around 3.9, with 25 more zeros added to it. Thankfully, not all of it reaches the ground here on earth.  We would fry. However, on a cloudless, sunny day one square meter of the earth will receive about one kilowatt of energy from the sun. So for the six hours in the middle of a sunny day, an area the size of a small backyard swimming pool will receive about 288 kilowatts of energy… just about 10 times what the average U.S household uses in an entire day. Unfortunately, our current technology doesn’t allow us to harvest anywhere near that amount efficiently.

Now, imagine if you will, future advancements in our technology, which will allow us to capture 80% of that energy and concentrate that solar power by 2000 times. What if it were possible to use the residual heat from this process to desalinate water? To provide heat or cooling as a “by product”? Starting to sound like a television commercial isn’t it? Thanks to the brilliant minds at IBM, Airlight energy and Swiss universities it’s now a reality. The basic operating principals are simple. As a matter of fact, the same basic process is currently in use at the world’s largest solar power plant, Ivanpah, in the Mojave desert. The biggest difference between the two projects? IBM has not only succeeded in miniaturizing the technology, it has incorporated ways to recover and use the other energies created in the process.

So, how does it work? IBM has a slide show available here, but the short version is as follows. A large dish shaped mirror (or a set of mirrors) focuses the sunlight onto a receiving point in front of the dish, much like a satellite TV unit. This receiver contains cells that process the concentrated sunlight. The cells that collect and process the energy are each only 1 centimeter square (a bit smaller than 1/2″ inch). Each one of those cells can convert about 200 to 250 watts of power within 8 hours, on an average sunny day. Put 144 of them on a panel the size of one square foot and you have the capability to process 30,000 watts of power in a day. Of course, with concentrated sun comes heat. To deal with this, the researchers came up with a “micro cooling system”, based on the design of the human body’s system of veins and arteries. The heat absorbed from the solar cells, is captured as a free byproduct and can be used for a multitude of things… including air conditioning. These can be built as stand-alone units or part of a grid, anywhere within the suns constant reach during daylight hours. Mountaintop towns, island cities, Antarctica… the possibilities are everywhere. For those that have no clue how big the Sahara desert is, an area ¾ the size of the United Kingdom could power our whole world. Will it come to fruition? That’s another question altogether.