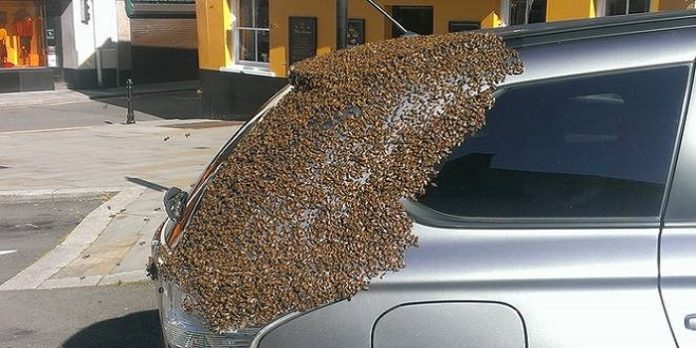 Clearly, devotion knows no limits between a queen bee and her loyal subjects.

Carol Howarth had no idea that when she parked her car in the town of Haverfordwest, Wales, chaos would ensue. As it turns out, a queen bee was attracted to the vehicle and accidentally got caught.

As a result, a swarm of 20,000 bees began hovering near the car as Howarth ran errands. The sight attracted the attention of a local man named Tom Moses, who was concerned that the bees would be poorly handled. (After all, bees’ numbers are on the decline thanks to the toxic effects of glyphosate-containing herbicides) For this reason, he called in a team of beekeepers.

“It was spectacular. I was driving through when I spotted the big brown splodge. A lot of people were really amazed by it, cars were slowing down and people were taking pictures of it.”

The beekeepers’ efforts helped calm down the hive, so spectators figured the situation was resolved. But nothing could have been farther from the truth.

Carol relayed that the swarm kept her vehicle in their sights and managed to track her down.

“The next day I realized that some of the bees had followed me home,” she said. To ward off the unwelcome visitors, she contacted the beekeepers again.

“We think the queen bee had been attracted to something in the car, perhaps something sweet, and had got into a gap on the boot’s wiper blade or perhaps the hinge. The swarm of around 20,000 had followed her and were sat around on the boot of the car,” said Roger Burns of Pembrokeshire Beekeepers.

Treehugger reports that in the end, the kidnapped queen bee and her subjects were safely reunited.

Many agreed that the sight was one of the strangest they’ve ever seen. Reportedly, ‘it is natural for [bees] to follow the queen, but it is a strange thing to see and quite surprising to have a car followed for two days.”

It seems devotion knows no bounds between a queen bee and her loyal followers. If you had hesitation believing nature is miraculous, this will surely change your opinion.

This article (20K Bees Chased A Car For 2 Days To Rescue Their Queen Bee) is free and open source. You have permission to republish this article under a Creative Commons license with attribution to the author and TrueActivist.com