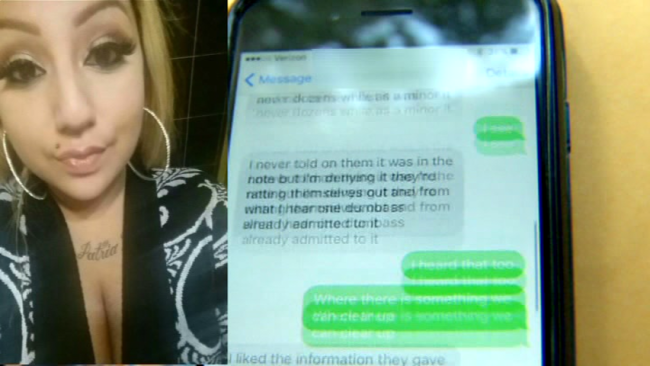 Well, it’s hard to look at the facts of the San Francisco Bay area sex scandal – which involves teen prostitute Celeste Gaup, who apparently had sex with dozens of local cops – and not just bow your head in shame. So, since Gaup – whose real name is Jasmine Abuslin – exposed cops from at least five different agencies, as having utilized her services, heads have rolled … well, not really. Out of all the cops who have admitted to having sexual relations with this prostitute, some while she was underage, none will face charges, as the District Attorney has deemed that none of them exchanged cash for her services, therefore, their actions are okay. The only cop to be charged is an 81-year-old retired captain, who admitted paying Gaup $250 for a hotel room and sex. The District Attorney’s decision was backed up by the San Francisco PD, whose Internal Investigation division also concluded no charges should be brought. All but two of the officers accused had either left their departments or had been terminated. “While we’ve completed a criminal investigation, we will continue to investigate and hold members accountable for any violations,” stated Toney Chapli, a captain with the SFPD. But the SFPD wasn’t the only agency implicated in this scandal. At least four other police agencies around the Bay area had members who admittedly engaged in sexual intercourse with Gaup.

“It is clear that several police officers had sexual relations with an admitted prostitute, however, according to Ms Absulin’s own statements…all of her descriptions of her sexual interactions with law enforcement officers in Contra Costa County were not crimes,” stated DA Mark Peterson. While generating probable cause and ultimately obtaining a conviction would have been an uphill battle, there are other ways to ensure that these officers never patrol the streets again. All too often we are shown the hypocritical side of law enforcement, where they so adamantly enforce laws they themselves have no intention on following. The one person who will be charged is an 81-year-old former captain who left the force in 1996. His charge stems from admissions he made to both the police and a local media station who contacted him, in regards to the allegations. According to reports, the retired captain gave Gaup $250 to meet him in a hotel room for sex. His admissions to the news outlet were accompanied by pleas not to reveal his identity. “Please don’t publish my name. I will die. I have a heart condition,” the man reportedly said. Not to defend the actions of the retired former officer, but again, it appears that the DA often goes after the weakest of the pack when they can’t muster a solid case.

In another not-so-shocking twist, Gaup has filed a $66 million law suit against the Oakland Police Department. According to Gaup, she was coerced into having sexual relationships with Oakland PD officers in exchange for protection from police. According to the lawsuit, “These acts constitute unlawful forced labor, trafficking into servitude and sex trafficking of a child by force, fraud, coercion and have caused (Jasmine) to suffer unimaginable abuse, pain, and suffering that she and her family will endure for the rest of her life.” The acknowledgment of sexual relations with a minor should be enough to land anyone in jail, however, no charges have, nor will they probably ever, arise from this case. Gaup, regardless of the reputation she has incurred, was a child, and therefore deserved the protection by those in positions of authority, as opposed to being exploited by them.

After returning from a Florida drug rehab center, her attorney apparently had Gaup away in a safe house. Gaup’s attorneys fear for her life, and have even advised her to wear a bulletproof vest at all times. Based on the allegations, the Alameda County District Attorney, Nancy O’Malley, has stated that she has launched an investigation independent of the involved police agencies. “We are being very sensitive to the young woman who has been exploited and been hurt. We are working diligently.” It is hard to decipher from these words how seriously the DA is truly taking the allegations.

The story broke after an Oakland police officer committed suicide, spilling the beans in his suicide note, on Gaup and the police department. Being that one person is left dead already, you would think every department would want to work together to see that justice is done. This, unfortunately, is not how things are done in the criminal justice system, where insiders continue to look out for their own.

This article (29 Bay Area Cops Implicated in Underage Sex Scandal – Only One Charged, Lawsuit Ensues) is a free and open source. You have permission to republish this article under a Creative Commons license with attribution to the author and AnonHQ.com.