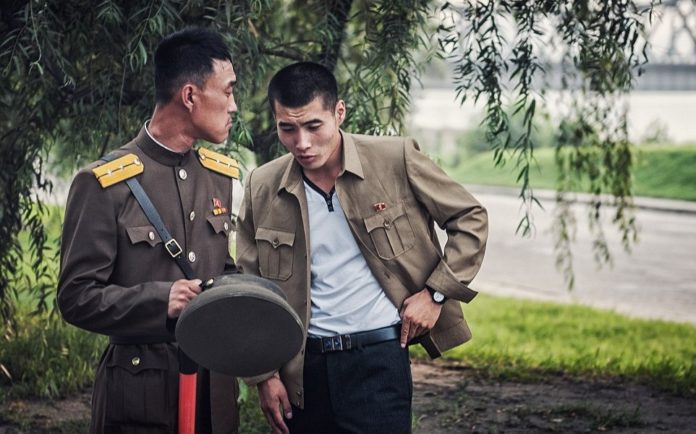 A daring photographer risked detention to smuggle a series of stunning images out of secretive North Korea.

Last year, photographer Michael Huniewicz traveled to North Korea from China to explore the secretive country, as well capture in raw form the state of its poverty-ridden society under the dictatorship of Kim Jong-un.

The stunning photos, which were shared with the Daily Mail, were “very stressful” to smuggle out, according to Huniewicz. Many times, his guides – which are mandatory for travel – warned him “You took too many photos. Too many.”  They were hinting at his likely detainment, as most of the shots were illegal to capture.

Regardless, he felt the risk was worth it, as the images give “a more candid look into the most mysterious country on the planet.”

These photos are unlike anything you’ve ever seen before, as they contrast greatly from the polished photographs peddled by the state-run news agency.

Mr. Huniewicz was careful to evade his minder’s watchful eye when he took these photographs. Some feature workers in the fields and others expose the squeaky-clean capital, Pyongyang.

Scroll through the photos he managed to smuggle out of the country below:

Street cleaners sweep pavements for dust under the keen eye of a soldier in one of the parks in the capital city, Pyongyang.

A waitress works in a restaurant while 24/7 propaganda plays on the television.

People waiting to sell human waste to be used as fertilizer

Rural: Locals wait for a train to pass, providing Michal moments to snap this image of life in North Korea’s countryside.

According to the photographer, the scene was staged, as there were no other trains that day.

North Korean workers carrying their equipment on a main road.

This custom declaration form reveals that it is illegal to bring laptops into the country. And, of course, Korean films, pornography, and even guide books.

One of the few entry points to North Korea for foreign tourists; was deserted when Michal was present.

A more realistic side to the capital’s city life?

Risky: A photo of North Korean soldiers, deep in conversation.

In rural parts of North Korea, miles of uninterrupted green fields can be seen. Farming remains key for survival.

The Sino-Korean Friendship Bridge remains one of the last bright lights for tourists entering North Korea from southeastern China.

“I had 15 seconds to take this picture. This shop is for the locals only, and I was kicked out of it by my guide soon after taking this photo, but he didn’t’ see me taking it,” Michal told Bored Panda.

Guards in watchtowers are positioned to prevent anyone from going astray.

People ride bicycles and use carriages, rather than driving cars and trucks.

“We were intercepted by our guides, who we could not leave during the entire stay, and who’d tell us when to sleep and when to wake up.”

“You are only allowed to photograph these statues if both bodies are featured in their entirety. There was an endless stream of North Koreans bringing flowers and bowing.”

North Koreans can only travel within the country when they receive a permit.

Three young girls play next to crops, which have been planted near a dilapidated pink tower block.

The streets of the capital city, Pyongyang.

Taking photographs in North Korea remains a difficult and risky task, with the government minders closely watching out for any straying foreign tourists.

Taxi drivers in the capital

A group of women in smart skirts, shirts, and red scarfs are pictured sweeping an already spotless pathway in North Korea’s capital city.

This article (30 (Illegal) Photos Of North Korea Kim Jong-un Doesn’t Want You To See…) is free and open source. You have permission to republish this article under a Creative Commons license with attribution to the author and TrueActivist.com