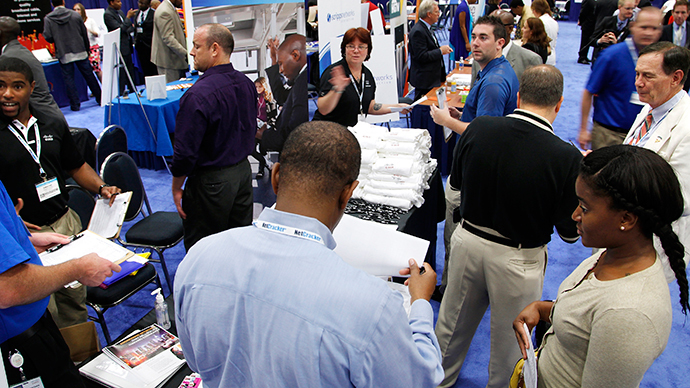 In February 2015, the number of Americans aged 16 and older not participating in the labor force hit 92,898,000, according to data released by the Bureau of Labor Statistics (BLS).

The BLS data revealed that over the longer trend, the labor force participation rate was between 62.9 percent and 62.7 percent from April 2014 through February, and has been hovering around 62.9 percent or lower in 13 of the 17 months since October 2013.

In February, the civilian non-institutional population – consisting of all citizens 16 or older who were not in the military or an institution – was 249,899,000.  157,002,000 (62.8 percent of the population) of those participated in the labor force by either having a job or actively searching for one, according to BLS data.

The registered participation rate reached its lowest level since February 1978 (62.7 percent) in September and December of 2014, and was entirely blamed on the aging baby boomer population.

The data points to the aging baby boom generation – those born in the post-war years between 1946 and 1964, as a primary reason for the significant drop.[1]

However, not all was bad apparently, because the economy created 295,000 jobs last month and the unemployment rate dropped to 5.5 percent, down from 5.7 percent in January. As expected, the White House used this show how effective their administration was, while disregarding the plunging participation numbers; as 354,000 leave the workforce and 295,000 find a job…. The administration seems unable to tell which number is bigger. Jason Furman, chairman of the Council of Economic Advisers, said:

“With another strong employment report, we have now seen 12 straight months of private-sector job gains above 200,000—the first time that has happened since 1977,”

Criticizing the Obama government and the unsatisfactory economic results, the Republican House Speaker John Boehner said in a statement, “Simply put, most Americans aren’t seeing the positive economic news translate into improvements in their daily lives,”