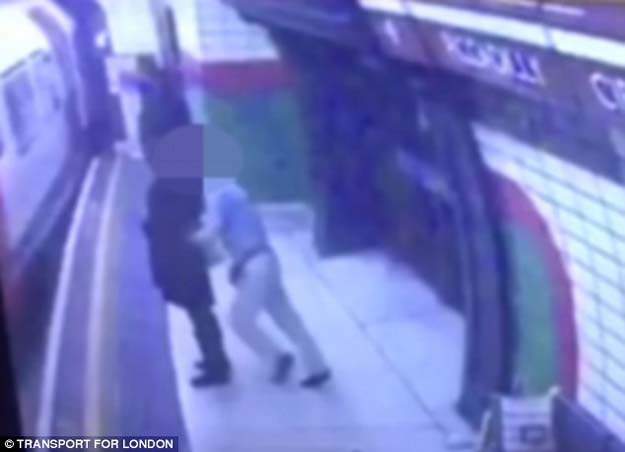 Some new CCTV footage of a man who appears to be pushing a woman in front of an oncoming London underground train was released to the public recently, exactly 2 days after the Paris Terror attack.

The man is seen standing next to a wall at the back of the station, staring in the woman’s direction. As one of the London underground’s Tube trains arrive at the platform the man is seen jolting forward and shoving the woman right into the side of the moving train. It seems as though the man was planning on the train actually hitting and killing the woman but was too late.

The woman hits the side of the train and falls back, falling onto the ground as many bystanders rush to help her up.

The incident took place last week, Tuesday the 10th of November at Piccadilly Circus station on a Bakerloo line platform.

Why did this all happen? Well… She was apparently a Muslim…

You can watch the video for yourself below, don’t worry it is not graphic.

A spokesman for the British Transport Police announced that the woman surprisingly escaped with only minor injuries. She was treated by paramedics then further assisted in hospital.

According to the Director of enforcement and on-street operations at Transport for London, Steve Burton, “This type of shocking incident is extremely rare,” also adding that “Our staff acted quickly to assist the woman and other customers at the scene, and we are working closely with the police as they carry out their investigation.”

A British Transport Police spokesperson noted that “Officers are currently working to build up a picture of exactly what took place and would like to hear from anyone with information.”

Japanese national Yoshiyuki Shinohara, 81, of no fixed abode, the attacker, was brought forth to Westminster Magistrates’ court last Thursday and has been charged with attempted murder.

The attacker is now to appear at Blackfriars Crown Court on November 25th where he could end up facing anywhere between 12 and 25 years in prison.

This Article (Man Shoves Muslim Woman Into Oncoming Train – London Underground) is free and open source. You have permission to republish this article under a Creative Commons license with attribution to the author(FLU5CH) and AnonHQ.com.