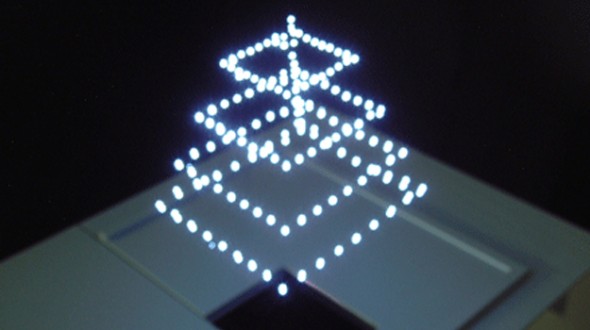 You’ve seen it in the cinema, on the television and even in cartoons.  Rendered 3 dimensional projection has entered the world of here and now. Well, the almost here and now. There won’t be any holographic French maids or pool boys to bend and pose at your command for a good length of time.

Thanks to the people at Tokyo’s Advanced Industrial Science and Technology (AIST), in collaboration with Burton Inc. and Keio University, new ground has definitely been broken in the ability to create 3D projections without any type of medium as a target focus point.  No screen, no vapor… nothing. Crisp, clean everyday air is all that’s needed (that may be hard to find soon too). The technology is relatively simple to understand yet complex to achieve. We’re told the correct description is that of a volumetric display.

“A volumetric display device is a graphic display device that forms a visual representation of an object in three physical dimensions, as opposed to the planar image of traditional screens that simulate depth through a number of different visual effects”.* The original technology used a high brightness, infrared pulse laser. This particular laser just happens to pulse at about 100 times per second. It’s definitely not your 70’s strobe light that’s hanging in the closet. The beam is shot into a motorized scanner which moves and focuses the laser in conjunction with the pulsing to create a matrix of dots in 3 dimensional patterns.  OK, it doesn’t sound exciting to some people but, it’s a baby step into an untouched abyss of creative euphoria. Fast forward to the latest press release from AIST… they are now producing projections at 1000 flashes per second. Is there any doubt of what may come in the near future? When will the first Star Trek Holo-deck be built?!

Perhaps you’re asking yourself “how is this gonna help my life?” To some, this whole deal may just be a tripping hazard; another project to distract you while walking down the street until that steel pole stops you. To others, it’s another miracle of science triggered by the imagination of science fiction. We’ve come a long way since 1951 and the 13 ton Univac computer (with its 5,200 vacuum tubes). Where would we be without imagination?