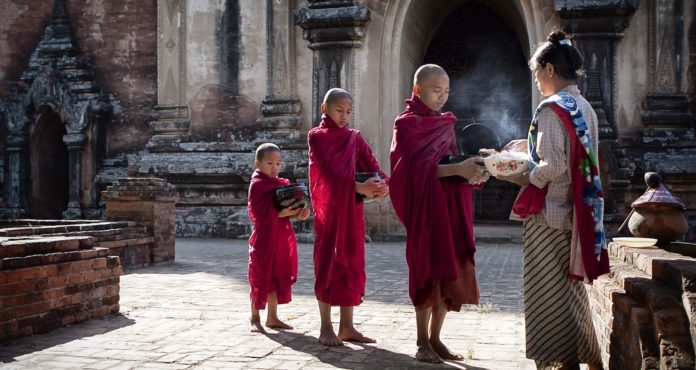 You would think – why Myanmar, one of the world’s poorest countries and not America, one of the world’s most affluent nations? According to Paul Fuller, lecturer in Buddhist Studies at the University of Cardiff, the answer lies in the strong influence of the particular form of Buddhism, called Theravada, practiced in the country.

“Throughout the country, the notion of ‘generating merit’ is very pervasive. The belief is that whatever you do here, in this life, will have consequences for your next life. Thus, the more merit you acquire now, the more you increase your chances of your next life being a good one… In Myanmar, special emphasis is placed on acts of giving. And the most common manifestation is making daily offerings of alms or food to monks — so much so that they have become an essential religious practice,” Fuller told NPR in an email.

Despite their highly developed economies, only 5 G20 countries are in this year’s Top 20, reminding us that economic prosperity does not automatically lead to a rise in generosity. This year, some of the biggest improvements were recorded in countries that were dealing with adversity. Donations were up in war-torn Ukraine and in the flood-ravaged countries of Eastern Europe.

“The world is becoming a more generous place. It is heartening to see that, even during these times of economic uncertainty across the world, people are increasingly likely to donate money to causes to help others,” CAF Chief Executive John Low said in a statement.

When the global goodness is added all together for the 145 countries surveyed, one-third of the world’s population gave money to charity last year. Nearly half the people on the planet said they had helped a stranger in need. For the first time in six years of the World Giving Index, it was found that men are more likely to donate money than women.

Here are the top 10 charitable nations on this year’s index: This Article (Myanmar Edges Out America, Becomes World’s Most Generous Country) is free and open source. You have permission to republish this article under a Creative Commons license with attribution to the author and AnonHQ.com.