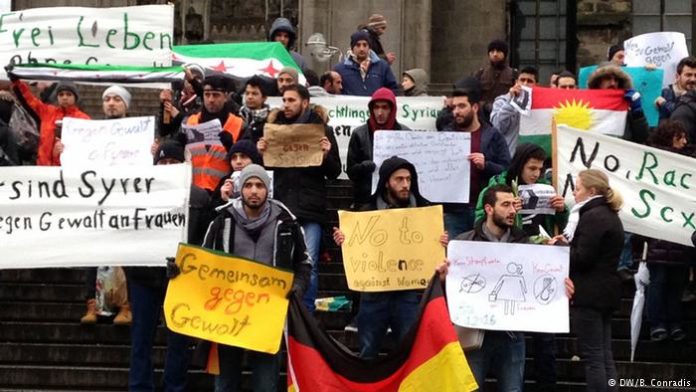 In the wake of New Year’s Eve attacks by migrants against German women, Syrian refugees have staged two protests against the sexual harassment of women by the individuals. Their actions underscore the fact that not all refugees can or should be painted with the same brush.

Jabbar Abdullah, a 28-year-old Syrian who was in Germany to study archaeology, spoke to DW about the intention behind the protests.

“Everybody in the media has reported that it was the refugees who did these things to the women,” he told DW. “So then this means that all of the refugees are seen as guilty.”

“This has nothing to do with Islam,” he said. “I’m not religious, but I come from a Muslim culture. All of these things are forbidden.”

Oula Suliman, 21, is a female Syrian who hails from Damascus. She emphasized the fact that sexual harassment did not occur to her while she grew up in Syria.

“In Syria that has never happened to me,” she told DW. She said that if a man attacked her on the streets of Damascus, other men would be quick to protect her.

Indeed, interviews with Americans who had lived in Syria before the civil war corroborate her account, describing it as being extremely safe.

“I think the German government today is doing something for humanity,” she said.

“I think the world sees us from small screens. They don’t see our reality,” she said. “I don’t blame people for thinking that we are bad, but I think we should work to change it.”

Videos from before the civil war highlight just how similar Syria was to Western nations.


“I am looking at all of you as a human being,” a Syrian man spoke through a microphone in English to the crowd. “Me as a Syrian. Me as a human being. I’m not afraid to say it loudly: Those criminals should be punished harshly by the German law.”

Tanjan Wiesenhof, a woman who came from Cologne , said that the media coverage of the Cologne attacks had been incredibly one-sided.

“I’ve never seen German men organize such an event,” she said. “Thanks to the refugees, we have this culture now.”

An American woman was even rescued by a group of Syrian refugees during the Cologne attacks.

It should be noted that the first suspect to be held for sexual assault over the Cologne attacks was in fact Algerian. Descriptions of the suspects apprehended so far, according to officers, indicate that most of the men were Algerian, Moroccan and North African in descent.

According to the BBC, those involved were described as “north-African/Arab”.

Refugees should not be painted with the same brush, based on the actions of a few thugs who inevitably camouflage themselves with the rest. As the Syrians themselves have stated, perpetrators of sexual harassment need to be dealt with severely- but the average refugee who is fleeing true terror should not have to be viewed as a sacrificial scapegoat.

This Article (Syrians Protest In Germany Against Sexual Harassment Of Women) is free and open source. You have permission to republish this article under a Creative Commons license with attribution to the author(CoNN) and AnonHQ.com.