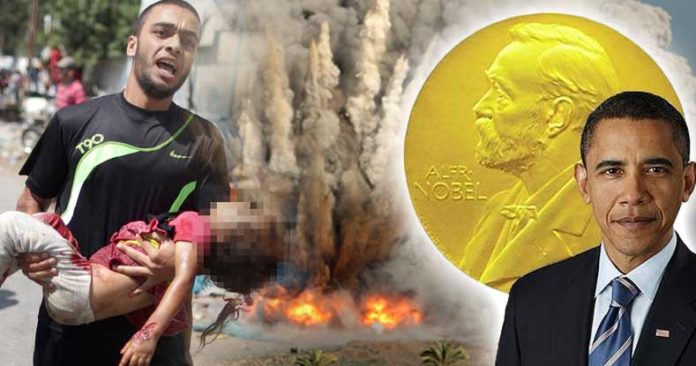 Micah Zenko, senior fellow at the council of Foreign Relations, has written a report that shows just how many bombs the US has dropped on Muslim-majority nations like Afghanistan, Pakistan, Yemen, Somalia, Iraq and Syria for the year 2015: 23,144 bombs, or more than 60 a day.

A staggering 22,110 of these were dropped on Iraq or Syria. In contrast, zero bombs have thus far been dropped in the US by… anybody in 2015.

Zenko finds that despite dropping 60 bombs a day on allegedly al-Qaeda and ISIS, recruitment has spiked for every bomb that has fallen onto Muslim land.

“Last year, the United States dropped an estimated total of 23,144 bombs in six countries. Of these, 22,110 were dropped in Iraq and Syria. This estimate is based on the fact that the United States has conducted 77 percent of all airstrikes in Iraq and Syria, while there were 28,714 U.S.-led coalition munitions dropped in 2015. This overall estimate is probably slightly low, because it also assumes one bomb dropped in each drone strike in Pakistan, Yemen, and Somalia, which is not always the case.” “Pentagon officials claim that at least 25,000 Islamic State fighters have been killed (an anonymous official said 23,000 in November, while on Wednesday, Warren added “about 2,500” more were killed in December.) Remarkably, they also claim that alongside the 25,000 fighters killed, only 6 civilians have “likely” been killed in the seventeen-month air campaign. At the same time, officials admit that the size of the group has remained wholly unchanged. In 2014, the Central Intelligence Agency (CIA) estimated the size of the Islamic State to be between 20,000 and 31,000 fighters, while on Wednesday, Warren again repeated the 30,000 estimate. To summarize the anti-Islamic State bombing calculus: 30,000 – 25,000 = 30,000.”

Something doesn’t quite add up here…

Either the CIA’s guestimations of “terrorists” vs civilians being killed have been absolutely meaningless, they haven’t been hitting IS as hard as they claim, or the bombs have only spurred better recruiting because of the mounting collateral damage. Most likely, it was a combination of the three.

Let’s look at drone strikes as an example. Of 1,147 people killed by drone strikes, only 41 were targeted terrorists. Ergo, if only 6 civilians were killed (let’s say all of them were killed by drones for convenience), at least 1,141 people who were not the intended target, (terror associates, family, friends or people who may have been passing by) were somehow determined to all be militants.

Indeed,  Zenko found that US government officials are not overtly concerned with the prevention of Islamic extremism. Wouldn’t get an excuse to use tens of thousands of very expensive bombs otherwise.

““what are you doing to prevent a neutral person from becoming a terrorist?” They always claim this this is not their responsibility, and point toward other agencies, usually the Department of State (DOS) or Department of Homeland Security (DHS), where this is purportedly their obligation internationally or domestically, respectively. DOS and DHS officials then refer generally to “countering violent extremism” policies, while acknowledging that U.S. government efforts on this front have been wholly ineffective.”

Basically- it’s either someone else’s job, or they have no idea what they’re doing (what’s a “countering violent extremism” policy??). At least when it comes to preventing extremism.

As for making extremists though… They have that down to a science.

This Article (  US Bomb Math: 30,000 IS Fighters Less 25,000 Killed By 23,114 Bombs= 30,000 IS Fighters) is free and open source. You have permission to republish this article under a Creative Commons license with attribution to the author(CoNN) and AnonHQ.com.