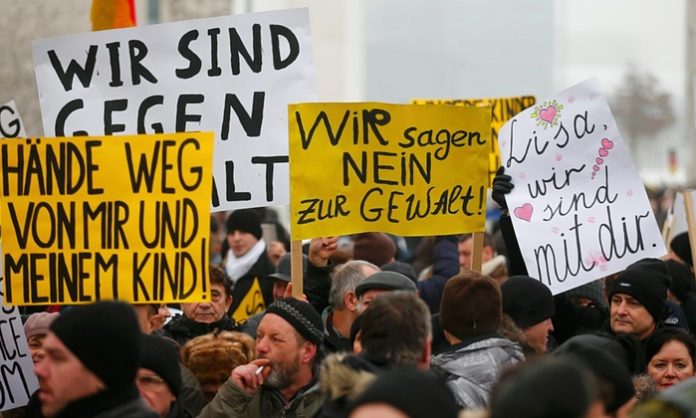 The 13-year-old girl who claimed to have been kidnapped and raped by migrants, causing widespread fury in Germany and a diplomatic spat between the Berlin police and the Russian government (she is ethnically Russian), has admitted that she had made up the story according to state prosecutors.

The parents of the girl only named as Lisa had reported her missing on the 11th of January when she did not show up at her school in the Marzahn district of Berlin.

She reappeared 30 hours afterwards with injuries on her face, and told her parents that she had been attacked by men who appeared to be Middle Eastern or North African in origin.

When trained specialists questioned her three days later however,  “she immediately admitted that the story of the rape was not true” according to Martin Steltner, the spokesman for the state prosecutor..

Apparently the teen was simply too scared to go home, after the school contacted her parents over an incident.

After the reports of mass sexual assaults that were blamed on migrants, this story would cause further outrage among the German people.

While the girl’s relatives had previously claimed that her allegations were not being properly investigated, it seems that the lack of an investigation might have been due to the fact that analysis of the girl’s own mobile phone records show that she had spent the night with a friend.

Lisa was “doing very badly”, according to her mother who spoke with Der Spiegel, and was being treated in a psychiatric ward.

This Article (Teen Girl Admits That Migrant Rape Claim That Infuriated Germany Was Made Up) is free and open source. You have permission to republish this article under a Creative Commons license with attribution to the author(CoNN) and AnonHQ.com.