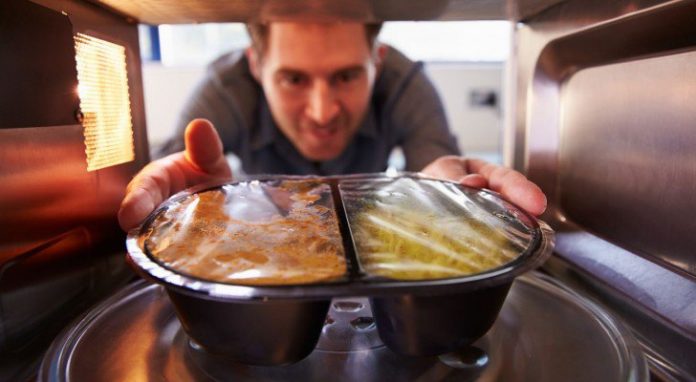 Heating/Cooking on a stove is different from heating/cooking in a microwave. Absolutely right. While conventional ways of heating/cooking your food HEAT/COOK your food, microwaves heat/cook YOU. If this sounds frightening, or very much like an over-the-top statement, read what the US Food and Drug Administration has to say:

It is known that microwave radiation can heat body tissue the same way it heats food. Exposure to high levels of microwaves can cause a painful burn.

Why Nuke Your Food? The Very Real Dangers of Microwave Oven Cooking http://t.co/Yng4Y3Ir6i

While in an earlier article, we shared some of the harmful effects (such as cancer, swollen lymph nodes and a weakened immune system) of using microwave ovens for cooking or re-heating food—and gave you ample reasons why you should stop using microwaves—in this article we will share the work of five scientific studies from across the world, to illustrate what effects microwave cooking or re-heating has on your food…

1. Way back in 1992, Department of Pediatrics, Stanford University School of Medicine, conducted a study which observed that microwaving breast milk caused a decrease in lysozyme activity and antibodies, and aided the growth of more pathogenic bacteria.

3. Research conducted by the Pennsylvania State University in 2001, concluded that 60 seconds of microwave heating or 45 minutes of oven heating can block the anti-carcinogenic activity of garlic.

Do not use the microwave. Use other methods to heat your food. #healthyeating pic.twitter.com/breSO13Nua

5. An Australian study, which was published in The Journal of Nutrition in 2008, found that microwaves cause a significantly higher degree of unfolding than conventional thermal stress for protein solutions heated to the same maximum temperature. Several neurodegenerative and other diseases are believed to result from the accumulation of amyloid fibrils formed by misfolded proteins.

Microwaves work by causing water molecules to resonate at very high frequencies, converting them into steam and thereby heating your food. While this might be a convenient way to prepare your food, using microwave radiation in this way actually changes the chemical structure of that food. Microwaving in plastic is dangerous too, because it can cause toxic chemicals (like phthalates and dioxins) to leak into your food.

Been over a month since I’ve stopped using the microwave. Not sure if it was actually having a neg effect on me but my food tastes better

And even though some “experts” still use the “fact” that “radiation doesn’t mean radioactive” to “give the final word on whether microwaves are dangerous,” the USFDA recommends taking “common sense precautions,” like not standing directly next to the microwave while it’s on.

This Article (This Is What Microwaves Do To Your Food [AND Why You Must Kill Them…Before They Kill You]) is free and open source. You have permission to republish this article under a Creative Commons license with attribution to the author and AnonHQ.com.