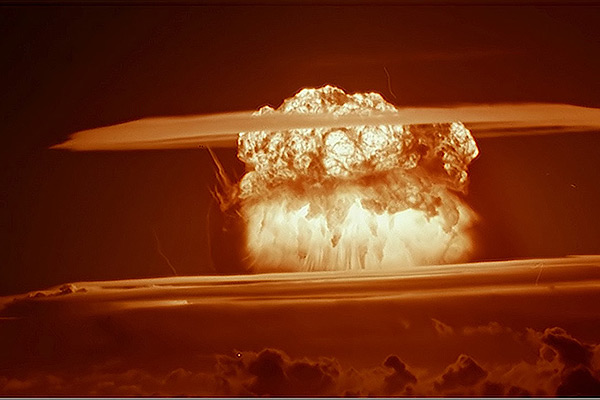 According to recently translated documents, China is looking to put its nuclear weapons arsenal on hair-trigger alert; this is a depressing escalation that could lead to a single devastating overreaction down the road.

Why This Is Bad News

This move is not to be taken lightly, for human history has been replete with examples of near-brushes with Mutually Assured Destruction (MAD); both the US and the Soviet Union came horrifyingly close to making MAD decisions based on false positives.

Despite these incidents, about half (many hundreds of strategic nuclear warheads) of the US’s and Russia’s nuclear arsenals are still on hair-trigger alert, ready to be launched in minutes should an instrument provide the wrong reading. Humanity wiped out because of an accident.

Analyst with the Union of Concerned Scientists, Gregory Kulacki, published a paper last week which claims that he found evidence of this change of policy in Chinese military documents. His full report can be found here.

He believes that the Chinese move is reactionary, and that the US is at least partly to blame for this escalation.

“It’s a combination of factors,” he explained. “First, the PLA is worried that it doesn’t have a credible nuclear retaliatory counterweight to highly accurate U.S. nuclear weapons, conventional weapons and missile defense systems.”

“Second, U.S. officials have refused to acknowledge that the United States is vulnerable to a Chinese retaliatory strike, which the Chinese think means the United States is not deterred from attacking them. And third, the United States has threatened China with a nuclear attack a number of times and still refuses to adopt a no-first-use policy. All that makes the PLA very nervous.”

Two trigger-happy nations with hundreds of nukes are bad enough. A third would only increase the chances of MAD for everyone, which is why Kulacki’s findings are of such great concern.

He cites a recent edition of The Science of Military Strategy, a standard military text in China, stated that “when conditions are prepared and when necessary, we can, under conditions confirming the enemy has launched nuclear missiles against us, before the enemy nuclear warheads have reached their targets and effectively exploded, before they have caused us actual nuclear damage, quickly launch a nuclear missile retaliatory strike.”

President Xi Jingping also said in a 2012 speech on nuclear policy that the PLA had to  “maintain a high alert level… assuring that if something happens we’re ready to go.”

A retaliatory strike before impact would require an early warning system; Kulacki found an internal military document that states that “there are plans to launch experimental early warning satellites”.

There Is Still Time To Prevent Escalation

A number of solutions were mentioned by Kulacki, who hopes to prevent the Chinese from making the move.

1) If  Russia and the US, in particular, were to take their nuclear weapons off of hair-trigger alert, China could see this as a clear sign that it does not need to keep its finger on its own MAD trigger. Basically, holster those weapons before somebody’s nervous twitch leads to world annihilation.

2) The US could also officially acknowledge that it is vulnerable to a Chinese nuclear strike; basically, agree that the other guy’s weapon is dangerous… and stop pretending that he’s only waving a used Styrofoam cup filled with toilet water.

3) The US’s recent focus on ballistic missile defenses threatens to give it the unilateral ability to launch nukes without suffering the MAD consequences. Limiting the number or development of anti-ballistic defense systems could help assuage Chinese fears.

5) Finally, it would be nice if the US would finally sign that no-first-strike agreement, considering how its conventional army is far superior to China’s (and literally the entire world’s) as it is; a nuclear first strike would be less than unnecessary. It is also particularly worrisome, when one considers its development of ballistic missile defense systems and its unwillingness to see the Chinese arsenal as a threat, as observed in the points above. The guarantee would ensure that a small shooting war does not end in a spectacularly explosive yet unhappy ending for all.

“They’re also talking about abandoning their no-first-use policy and using nuclear weapons to respond to conventional attacks. The alarm bells should be going off,” said Kulacki.

“What the U.S. says and does regarding nuclear weapons has a profound effect on Chinese thinking. And right now, we’re pushing China in the wrong direction.”

This Article (China Might Put Nuclear Arsenal On Hair-Trigger Alert, The First Time It Has Ever Done So) is free and open source. You have permission to republish this article under a Creative Commons license with attribution to the author(CoNN) and AnonHQ.com.