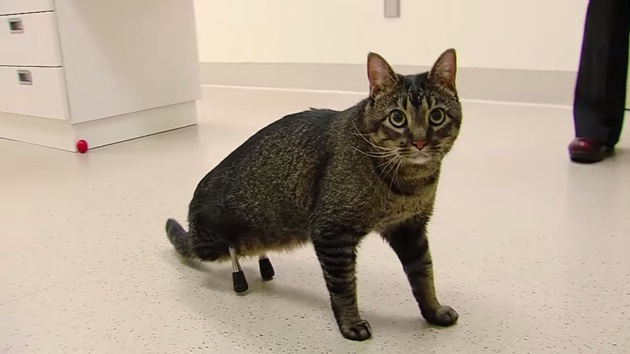 Meet Vincent the cat, one of the few animals in the world to be fitted with prosthetic legs. Vincent’s story went viral on social media after Iowa State University, where his surgeon Dr. Mary Sarah Bergh, an associate professor of Veterinary Clinical Sciences, posted a video of Vincent walking on his 3D-printed prosthetic legs.

Vincent’s owner, Cindy Jones, 57, adopted him from the Story County Animal Shelter in Nevada, Iowa, where she works. “I took one look at him and feel in love,” Jones says in the video

“He was surrendered to the shelter by a lady who was camping in a local campground. … He was missing his hind legs from the mid-tibia down and when the lady brought him in, you could tell she was pretty worried,” Jones told ABC News.

It is uncertain whether Vincent’s disability was sustained from an accident or was present at his birth. However, when Jones’ daughter, Emily, a student at the veterinary school at Iowa State University, suggested that one of her teachers may be able to help Vincent, the family’s hopes of giving Vincent his best possible chance at having a normal life were restored. After attempting to save of Vincent’s legs with physical therapy, Dr. Mary S. Bergh decided that surgery—the first of its kind—would be best suited to Vincent’s case. “It’s the first one we’ve ever done and they’ve been very few people in the world that’ve tried to do something like this.”

“A lot of the time, when people think about prosthetics, they think of something that is strapped onto a leg to allow walking. In animals, that’s is not usually a very viable option, especially in the femur and thigh, which is where his injuries are, there is nothing really to strap on,” explains Dr. Mary S. Bergh.

In total, 3-year-old Vincent has had two surgeries. His first surgery, which took place in February 2014, was successful and allowed Vincent to walk for the very first time. He underwent surgery again in February 2015, in order to be equipped with longer limbs. Since his last surgery, Vincent has received treatments to gradually lengthen his prosthetic legs. These treatments are expected to continue until Vincent is fully grown.

Although cases of 3D printing and prosthetic limbs are becoming more and more common as science advances, Vincent’s case is still incredible unique. “It is extremely rare. In fact, if I had to guess, there is probably less than 25 animals in the world who have ever had anything quite like what he’s got,” said Dr. Mary S. Bergh.

As a result, Vincent’s unique case will be used as a reference for similar deformities in animals and will help advance future designs of prosthetic limbs.

“I think this does open the door for us to be able to help other animals that have similar problems,” Dr. Bergh told 3DPrint.com. “And even what we’ve learned just through Vincent’s one case, we’ve actually refined the technique and the implants, so the next cases we do moving forward will be even more successful.”

According to reports, Vincent condition is sable and he is living a very happy and healthy life with his new family. “His bone is looking great,” Bergh said. “The implants are stable, and he’s walking really well on them. We couldn’t be happier with how he’s doing at the current time.”

Since the video went viral, Dr. Bergh has revealed that Iowa State decided to share Vincent’s story in order to inspire other pet owners in similar positions. “That’s one of the things that makes it so special,” Bergh said. “People can realize there are things we can do for animals that have disabilities like Vincent’s. People don’t have to assume there’s no hope.”

This Article (Iowa State University Give Cat 3D-Printed Prosthetic Legs; Cat Walks For The First Time) is free and open source. You have permission to republish this article under a Creative Commons license with attribution to the author and AnonHQ.com.