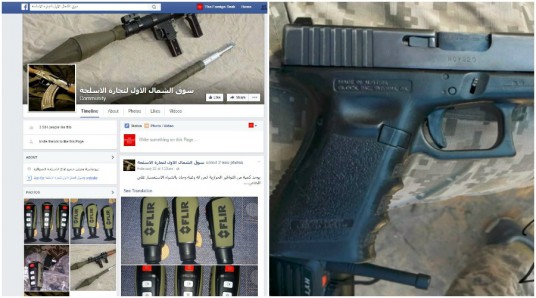 It’s pretty insane when a made-in-USA TOW missile is used to blow up a made-in-USA Humvee (as seen in the video below). What’s even more ridiculous, is that it seems as though ISIS is so flush with armaments from all over the world (including the USA) that it has taken to selling them on Facebook of all places.

“The first weapons market in the Idleb countryside” is a Facebook page that posts photographs of weapons, many of which it claims/admits are CIA-supplied. The authenticity of this claim obviously can’t be verified.

Transactions were discussed via Whatsapp, and one could theoretically buy a thermal camera made by US-based FLIR in just a few screen taps. Prefer less discreet options? An AGS-17 Soviet-era grenade launcher goes for 3,800 dollars. Need a bigger bang? Buy a 105mm Howitzer shell instead. Limitless possibilities!

For its part, Facebook bans weapon sales and trading on its social media platform. When Foreign Desk reported the page, it was taken down. However by the time they removed the page, it had already garnered thousands of likes and thus potentially sealed a number of illicit deals.

Throughout the conflict, the US tried to supply what it apparently believed were “moderate” opposition, though these factions often cooperated with extremist groups like al- Nusra or even the kingpin of terror ISIS itself… and weapons tend to get “lost.”

Jihadists/mercenaries trying to offload weapons they’d been supplied might mean one of three things: that their movement is running out of manpower, fanatics, or cannon fodder willing to use these tools of death; that they are low on funds; or that they simply received far too many weapons from their benefactors.

This article (Jihadists Sell “CIA-Supplied” Weapons on Facebook) is a free and open source. You have permission to republish this article under a Creative Commons license with attribution to the author(CoNN) and AnonHQ.com.