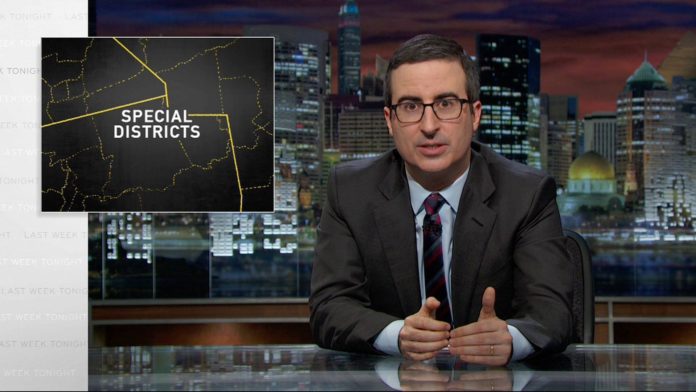 What makes a district “special?” Apparently, they excel at stealing your tax money. Last Week Tonight host John Oliver explains the concept of “special districts” by noting that “special districts are small units of government with the power to take tax dollars to do one specific thing.” Fire districts and water districts are two of the more legitimate children of the parent term. However, there are many other types of special districts… some with far darker back-stories.

Christopher Berry, an Associate Professor of the University of Chicago notes that just 40,000 of these districts account for 100 billion dollars of spending per year: 2.5 million per district per year on average. Oliver points out that this figure is higher than Russia’s total military spending per year. Russia would probably lose a war to America’s special districts.

The districts are so unaccountable that some states don’t even know how many they have. Special districts also overlap, confounding the matter even further. Obscenely, the difference between being in one special district and another just down the street, meant that a man had to pay a 1,000 dollars for being part of an “irrigation special district”- or 993 bucks more than his neighbor.

After that bombshell has sunk in, watch as two men who are the sole members of the Litchfield New Hampshire Mosquito Control District take the Pledge of Allegiance in an empty room. Then watch as they do a roll call. Sad, so sad. They even ask for input from the non-existent public. It would have been interesting if somebody did respond in that empty room, though chances are the two would have responded without batting an eye.

“One of the most interesting ways how special districts are different from any form of government is that they can be created seemingly out of thin air. For instance, in Conroe, Texas, a company was looking to create a new neighborhood on undeveloped land. They wanted to form a special district which could issue bonds. Now to do this, the law required a vote, but remember, no one lived there yet. So what did they do? So guess what they did?”

If you guessed that they hired two people to move into the area with a mobile home to vote for 500 million dollars worth of bonds, before packing up and disappearing into the ether…well, here’s a virtual high five.

The process  is legal and so common, that the two work in a company called Stingray Services which “specializes in turn-key voter trailer election services.”

“You’re the election officials and your trailer is the polling station!” concludes Oliver incredulously.

This article (John Oliver Explains the Corruption so Heinous, You’ve Probably Never Heard of It) is a free and open source. You have permission to republish this article under a Creative Commons license with attribution to the author(CoNN) and AnonHQ.com.