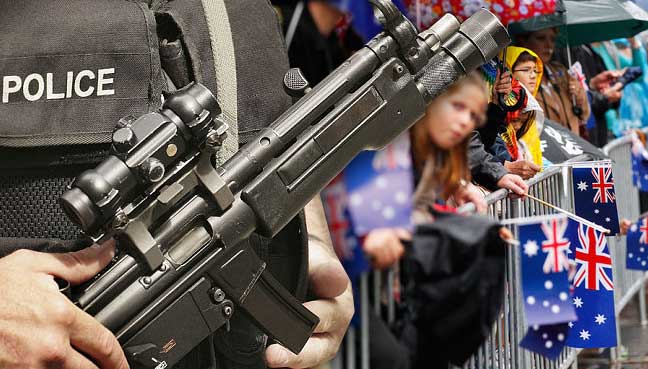 The Anzac Day celebrations – this year celebrating a 100 year milestone – was expected to see record numbers turn out. It is also a day in which the traditional 25th April AFL match can see upwards of 85,000 fans at the MCG in Melbourne.

However, in light of the Anzac celebrations, a 16-year-old boy has been arrested and charged with plotting an alleged terror attack planned for the Anzac Day commemorations in Sydney, Australia. It has been the second Anzac attack thwarted in as many years.

“Clearly this is an ongoing problem for some very small proportion of our society, the radicalisation of youth,” Australian Federal Police Commander Chris Sheehan said.

Officers were said to have acted on Sunday, after it became clear that the suspect was attempting to obtain a firearm between 12.01am on Saturday and 6pm on Sunday. NSW Police Commissioner Andrew Scipione said the arrest took place by counter terrorism police, in Sydney’s west near the boy’s home.

The maximum offence if found guilty of planning a terrorism act is life in jail.

Federal Justice Minister Michael Keenan also stated that another six local terror plots have been stopped over the last 18 months, a rise he says, has since occurred after Islamic State have become more prominent.

No additional details about the arrest have been released, but Mr Keenan did say there was no indication that police would make more any further arrests.

This article (Anzac Commemorations a Target for Terrorist Attacks, 16-Year-Old Arrested) is a free and open source. You have permission to republish this article under a Creative Commons license with attribution to the author AnonWatcher and AnonHQ.com.