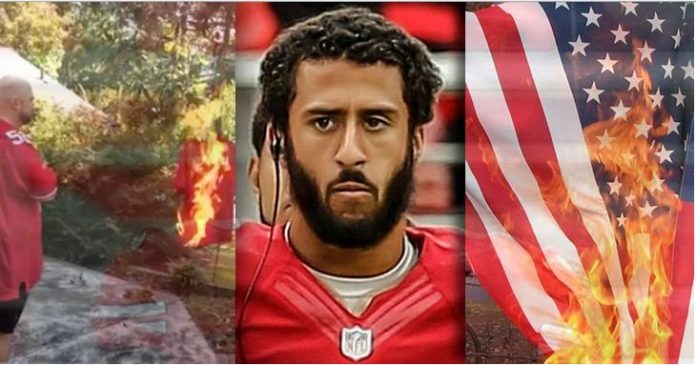 By S.m. Gibson at theantimedia.org

San Francisco 49er’s quarterback Colin Kaepernick made headlines this week for not standing during the national anthem at a preseason NFL game against the Green Bay Packers. Predictably, outraged Americans have spewed vitriol in Kaepernick’s direction ever since he engaged in his benign protest. Former fans of the 2011 2nd round draft pick have taken their emotional fury to social media to show their disapproval of the quarterback’s action (or lack thereof). One 49er’s fan went as far as to post a video of him setting Kaeprenick’s jersey on fire and then saluting the flames as they consumed the replica uniform. Of course, the national anthem played as the fire incinerated the shirt.

“I am not going to stand up to show pride in a flag for a country that oppresses black people and people of color,”Kaepernick told NFL Media after the game. “To me, this is bigger than football and it would be selfish on my part to look the other way. There are bodies in the street and people getting paid leave and getting away with murder.”

Kaepernick’s demonstration has illustrated one thing for certain: people’s priorities are screwed up. If you’re “triggered” by an athlete not standing up during a song in your “safe space” of a football stadium but are unbothered by the actions of the U.S. government — not just in this country but around the world — you’re living proof that propaganda works.

Below are six headlines from this week that are actually infuriating.

A 76-year-old military veteran killed himself outside a Long Island Veteran Affairs facility Sunday after being denied treatment. He was reportedly seeking help for mental health issues at the Northport Veterans Affairs Medical Center but was turned away, an unfortunately common experience plaguing veterans seeking healthcare in recent years… (Read more here)

The U.S. government has shipped over 1.4 million guns to Iraq and Afghanistan since 9/11, according a new analysis by the U.K.-based watchdog Action on Armed Violence (AOAV), but the Pentagon is only able to account for fewer than half of them… (Read more here)

The EpiPen Scandal Is Worse Than You Think: What You’re Not Being Told

The EpiPen is a useful device for individuals who suffer from severe allergies. So when news broke that Mylan, the sole maker of the autoinjector “pens” in America, had hiked the prices of its products from $57 each in 2007 to $600 for a package of two in 2016, news outlets had a field day… (Read more here)

A nine-year-old boy with hopes of becoming a pilot was traumatized by TSA agents at the Phoenix Sky Harbor Airport when he was told that, because of his pacemaker for his heart condition, he was ineligible for screening…. (Read more here)

As the Lakota Sioux continue their peaceful blockade of the $3.8 billion Dakota Access Pipeline, the story’s absence from the national media narrative is palpable. Considering the corporate media’s chronic quest for controversial stories on government versus public standoffs, you’d think this situation would garner the typical media frenzy invoked during a right-wing militia occupation of a federal building, for example, or a tense standoff between the Black Lives Matter movement and police. But it’s not…. (Read more here)

WhatsApp Isn’t Only Giving Your Information to Facebook — and No, You Can’t Opt-Out

When Facebook purchased the encrypted mobile messaging app, WhatsApp, for $19 billion in 2014, some users were concerned about the security of their information and the implications of their private correspondence being handed over to the largest data mining operation in human history. At the time, WhatsApp founder Jan Koum claimed there would be no changes in operations, claiming:… (Read more here)

This article (6 Stories More Infuriating Than A Football Player Not Standing Up During A Song) is free and open source. You have permission to republish this article under a Creative Commons license with attribution to SM Gibsonand theAntiMedia.org. Anti-Media Radio airs weeknights at 11pm Eastern/8pm Pacific. If you spot a typo, email[email protected].