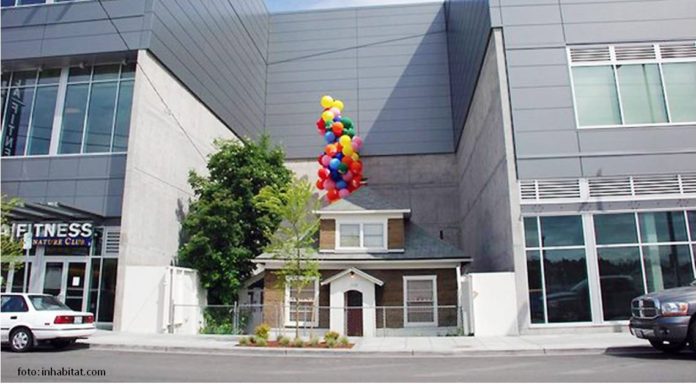 Seattle, WA – After receiving a million dollar offer on her house in 2006, 84-year-old Edith Macefield, refused because she didn’t want to uproot and relocate. The developers planning to construct a shopping mall in the Ballard neighborhood, were ultimately forced to build around her.

After the news of her resilience to corporate pressure hit the internet, Macefield and her house became a symbol of strength, inspiring the model for the house in the Pixar movie “Up”.

Edith Macefield, sadly passed away in 2008 at 87-years-old, leaving her house to Barry Martin, a construction chief at an adjacent building site. Martin had often helped Edith—who had been diagnosed with pancreatic cancer—by driving her to appointments and looking after her. Thankful for his kindness, Edith repaid the favor by leaving him her famous home. Originally. Martin had planned to turn Edith’s home into a memorial, but the plans fell through. He has since sold the house to a real estate coaching firm known as Reach Returns, now known as Cor Company.

Many investors lost their money on the house as restorations came to a halt. Reach Returns collected a lot of money under the premise they would lift the house 30-feet up in the air, but this never happened. According to reports, the lenders have gained possession of the house through foreclosure. The house was listed for sale in March of 2015, however it never sold due to the $170,000 price tag compared to the $300,000 owed in lien taxes. The house has since been listed without a tax lien, and is available to purchase. Below is a video of the house in its current condition: