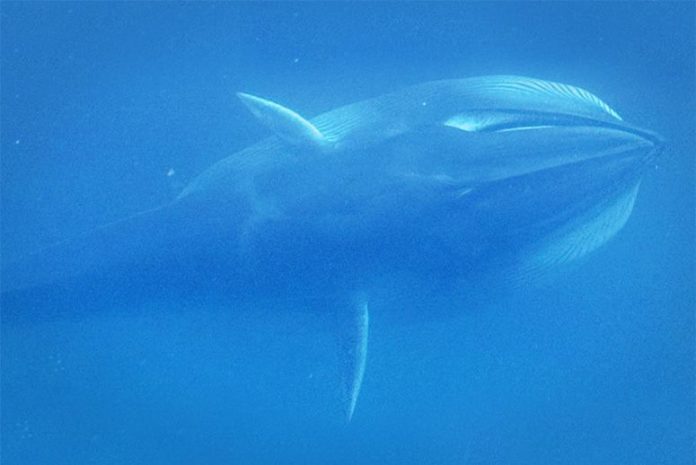 For the first time, an international team of scientists have captured the first live footage of the elusive Omura’s whale in waters off the coast of Madagascar. In 2003, using genetic data from samples obtained from old whaling expeditions and a few strandings in the western tropical Pacific, scientists determined Omura’s whales were actually a distinct species. But there had been no confirmed records of sightings in the wild and little else had been known about the elusive species until now.

In a new study published in the Royal Society Open Science journal, researchers found a whole population of Omura’s whales swimming, foraging, and singing off Madagascar’s north shore. They closely resemble the Bryde’s whale, but unique asymmetrical pigmentation on the head and a lower jaw with contrasting light and dark sides showed the scientists these whales were something different.

“Over the years, there have been a small handful of possible sightings of Omura’s whales, but nothing that was confirmed. They appear to occur in remote regions and are difficult to find at sea because they are small—they range in length from approximately 33 to 38 feet—and do not put up a prominent blow. What little we knew about these whales previously came primarily from eight specimens of Omura’s whales taken in Japanese scientific whaling off the Solomon and Keeling Islands and a couple strandings of dead animals in Japan,” said Salvatore Cerchio, the study’s lead author and a researcher at the Wildlife Conservation Society. Since very little is known about Omura’s whales, scientists are unsure how many exist or how rare the species is.

“What little we knew about these whales previously came primarily from eight specimens of Omura’s whales taken in Japanese scientific whaling off the Solomon and Keeling Islands and a couple strandings of dead animals in Japan. This is the first definitive evidence and detailed descriptions of Omura’s whales in the wild and part of what makes this work particularly exciting,” added Cerchio.

For many years, these marine mammals were misidentified as Bryde’s whales due to their similar appearance—both are small tropical baleen whales with comparable dorsal fins, though Omura’s are slightly smaller in size and have unique markings with a lower jaw that is white on the right side and dark on the left.

When Cerchio and his colleagues, who have been conducting field research on marine mammals off the northwest coast of Madagascar since 2007, first spotted an Omura’s whale in the area in 2011, they too believed it was a Bryde’s whale. After moving study areas in 2013, the sightings became more frequent and the team noticed the distinct markings that led them to believe the whales might be Omura’s whales. The researchers spent the next two years observing 44 groups of Omura’s whales, photo documenting 25 individual whales, and collecting skin biopsies from 18 adult whales. The scientists also observed four mother whales with their calves, and recorded their song-like voices. They also found Omura’s whales likely feed on tiny zooplankton by taking in large mouthfuls of water and filtering it through hairy sieve-like teeth, known as baleen.

This Article (A First: Rare, Elusive Omura’s Whale Caught On Camera) is free and open source. You have permission to republish this article under a Creative Commons license with attribution to the author and AnonHQ.com.