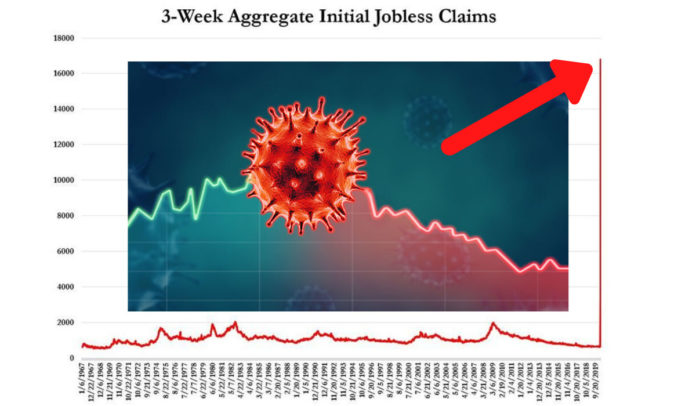 Two weeks ago it was a record 3.3 million initial claims;  last week it was an  additional (upwardly revised) 6.875 million in initial claims, and this week another 6.606 million claims (almost exactly our expectation of 6.5 million).

That is a shocking 16.78 million people who have applied for unemployment benefits in the last three weeks. And of course, last week’s “initial” claims and this week’s “continuing” claims… the highest level of continuing claims ever.

The three-week tally implies an unemployment rate of around 13% or 14%, surpassing the 10% peak reached in the wake of the last recession. Put another way, we have lost 1132 jobs for every confirmed US death from COVID-19 (14,817). This is simply stunning.

“The prospect of more stringent lockdown measures and the fact that many states have not yet been able to process the full amount of jobless claim applications suggest the worst is still to come.”

And another important note is that weekly jobless claims data are based on “hard facts”, UBS points out, unlike survey data
which is subject to quirks around:

a) some of the treatment of supply chains, which has flattered data,

b) the fact that many respondents will not be replying to surveys during the virus disruption period, and

c) survey data will give more accurate assessments during ‘normal’ times, perhaps not as much in unusual times.

Of course, the government is coming to the rescue. As a result of the freshly-passed ‘relief’ bill, self-employed and gig-workers who previously were unable to claim unemployment benefits are now eligible. In addition, the unemployed will get up to $600 per week for up to four months, which is equivalent to $15 per hour for a 40-hour workweek. By comparison, the government-mandated minimum wage is about $7.25 per hour and the average jobless benefits payment was roughly $385 per person per month at the start of this year.

“Why work when one is better off not working financially and health wise?” said a Sung Won Sohn, a business economics professor at Loyola Marymount University in Los Angeles.

With more than 80% of Americans under some form of lockdown, up from less than 50% a couple of weeks ago, this is far from over.

Picking up on our analysis from last week, BofA notes that data from Google Trends reveals further pickup in searches for “unemployment benefits” and “filing for unemployment,” which could argue for even more upside from here.

Worse still, the final numbers will likely be worsened due to the bailout itself: as a reminder, the Coronavirus Aid, Relief, and Economic Security (CARES) Act, passed on March 27, could contribute to new records being reached in coming weeks as it increases eligibility for jobless claims to self-employed and gig workers, extends the maximum number of weeks that one can receive benefits, and provides an additional $600 per week until July 31. A recent WSJ article noted that this has created incentives for some businesses to temporarily furlough their employees, knowing that they will be covered financially as the economy is shutdown. Meanwhile, those making below $50k will generally be made whole and possibly be better off on unemployment benefits.