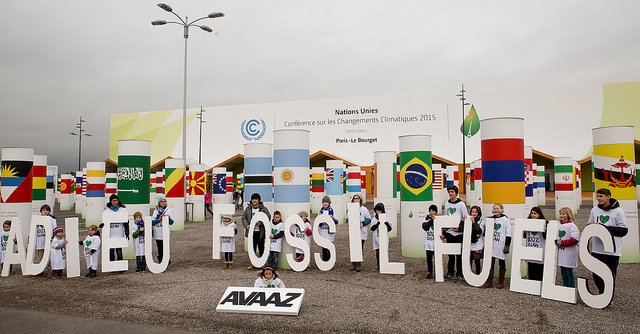 Before the global climate change conference in Paris adopted an international accord to transform the world’s fossil fuel-driven economy –  to slow the pace of global warming to well below 2 degrees Celsius, a group of young activists had similar thoughts.  The young activists held letters that spell out “Adieu Fossil Fuels,” putting last minute pressure on climate negotiators in hopes that the deal will shift the world away from fossil fuels, and toward 100% renewable energy.

“If we can move to 100% clean energy by 2050, it means this generation standing behind me really will see the end of fossil fuels,” Avaaz interim ED Emma Ruby-Sachs said with a group of children outside the ‪‎COP21 on the last day of the summit.

Adieu to fossil fuels!“If we can move to 100% clean energy by 2050, it means this generation standing behind me really will see the end of fossil fuels,” Avaaz interim ED Emma Ruby-Sachs said this morning, with a group of children outside the #COP21 on the last day of this critical climate summit. Saying adieu to fossil fuels is 100% possible if we want it. Add your voice here: http://avaaz.org/100clean

Scientists have warned for decades that the increase in carbon dioxide in the atmosphere – largely from burning coal oil and gas – would lead to more of the Sun’s heat being trapped on Earth. While prominent environmental groups welcomed the historic accord, they urged the countries to put the agreement into action.

Kelly O’Shanassy, CEO of Australian Conservation Foundation, said the agreement was a sign of how important it is to solve global warming.

“It’s a historic day today… for the first time humanity has united around a goal to reduce pollution, ultimately to zero, so that we can actually have a safe climate for all life on Earth. So it’s going to mean a better future, and it’s also going to mean a better future for our children and for things that we love like the Great Barrier Reef that will die off with global warming if we let too much more pollution up into the atmosphere.”

The “Paris effect” will ensure the economy of the future is driven by clean energy https://t.co/SkmDHJDVNJ #COP21 pic.twitter.com/slgNbfQcBC

Greenpeace International’s executive director Kumi Naidoo added the deal puts the fossil-fuel industry on the wrong side of history.

“The wheel of climate action turns slowly, but in Paris it has turned. Today the human race has joined in a common cause, but it’s what happens after this conference that really matters.”

This article (Adieu Fossil Fuels: Children Call for a Fossil Free Future [VIDEO]) is a free and open source. You have permission to republish this article under a Creative Commons license with attribution to the author and AnonHQ.com.