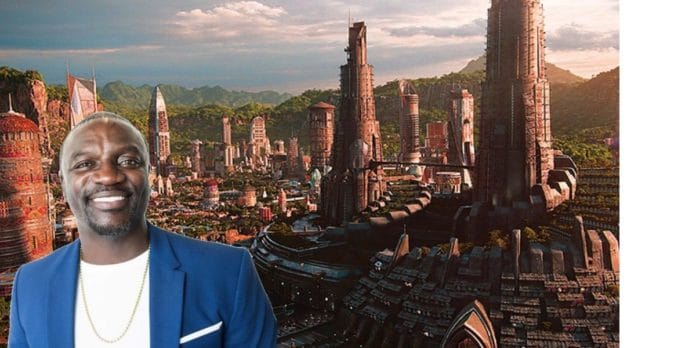 Akon plans to build a cryptocurrency-run city in Africa that will rival the mythical kingdom of Wakanda from the Marvel film Black Panther. The “Locked Up” legend, who hails from Senegal, joined TMZ Live on Tuesday (August 11) where he talked about his $6 billion vision.

Akon City, a “futuristic cryptocurrency themed city” founded by music mogul Akon, is ready to begin construction in Senegal, after securing $4 billion from investors. The city will exclusively use the “Akoin” digital currency and plans to have parks, universities, schools, a stadium, hotels, and more. It will be the de facto currency in a Senegalese city he’s constructing on land donated by the government. Will cryptocurrencies become the tool that puts African nations on the path to overcoming their economic challenges?

“Akoin is a cryptocurrency powered by a marketplace of tools and services fueling the dreams of entrepreneurs, business owners, and social activists as they connect and engage across the rising economies of Africa and beyond,” according to the project’s website.

Akoin, is now part of the nearly 1,600 cryptocurrencies trading around the world in an industry with a market capitalization of more than $267 billion, according to data from CoinMarketCap. The digital currency was originally announced in 2018 and CultureBanx reported that along with his team they plan to build a whole ecosystem around Akoin, including construction of the city and initiatives to support young entrepreneurs.

The city centerpiece will be a $1 billion, 5,000-bed state of the art hospital, which is part of the first phase of construction along with residences, hotels, schools, a police station, fire department, an airstrip, a mall and other staples of a major city.

“It’s going to be one of many throughout all of Africa starting in Senegal,” he said. “As of right now, it’s like, ‘What do we start to build first?’ I wanted the city to be something that was in there that would actually be utilized by the whole country. We’re starting with the hospital first. It’s gonna be one of the biggest hospitals in all of West Africa. We noticed that a lot of times someone may get sick with a serious illness but some place in Africa, you have to fly into America or Europe to get treated.”

“It’s actually amazing man, especially for what Wakanda the film did for Africa itself from a branding standpoint,” he says. “Before then, it was a big jungle, a lot of war-torn countries and AIDS-infested spaces in Africa that people had this vision of. But this movie literally made an idea of what Africa could really be and what it could really look like for the future.

“It was just ironic that I was already working on this before the movie actually came out. It was something that helped me a lot, in a big way from a standpoint of trying to explain to people what I was trying to do.”

Akon was granted a $6 billion grant to begin construction on the city in June. Phase I is expected to be complete by 2023, while Phase 2 will take place between 2024 to 2029. The final phase, Phase 3, will include parks, universities, schools, a stadium, hotels and an industrial complex and will hopefully be finished by 2030.