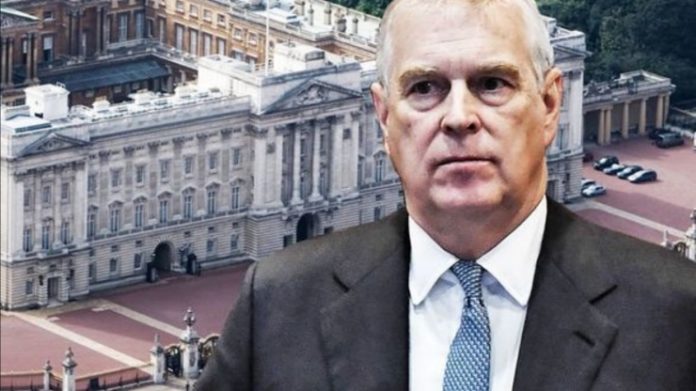 In footage later released of the protest, protesters can be seen waving banners with Prince Andrew’s face along with messages condemning his crimes.

This Saturday in London, protesters gathered outside of Buckingham Palace as part of a demonstration against child exploitation. Protesters shouted accusations of “pedophile” outside the gates of the palace, in reference to Prince Andrew’s involvement in Jeffrey Epstein’s child trafficking ring.

The protests were organized through a Facebook event page called, ‘Freedom For The Children Global Walk London.’

A post on the event page read: “The purpose of this walk for change is to bring awareness to the current reality of child exploitation within our own communities and around the world. Let’s show our devotion and determination toward protecting these children, our communities most vulnerable, by requesting change and reformation within our government and law enforcement agencies to ensure that justice is brought in such a manner that it will significantly reduce instances of child exploitation while promoting awareness in order to end this ongoing issue.”

In footage later released of the protest, protesters can be seen waving banners with Prince Andrew’s face along with messages condemning his crimes.

In footage said to be from yesterday, protesters outside Buckingham Palace chant 'paedophile, paedophile'. You're unlikely to see this on the BBC…

Meanwhile, Prince Andrew has been dodging investigators that want to question him about the accusations made by some of Epstein’s victims.

New York prosecutors have said that the prince has “completely shut the door” on cooperating with authorities. They are now considering what further legal action can be taken.

Andrew continues to deny any wrongdoing or knowledge of Epstein’s many crimes, despite a growing body of evidence indicating that he was involved.

Manhattan Attorney Geoffrey Berman described the prince as a “co-conspirator.”

“Contrary to Prince Andrew’s very public offer to cooperate with our investigation into Epstein’s co-conspirators, an offer that was conveyed via press release, Prince Andrew has now completely shut the door on voluntary cooperation and our office is considering its options,” Berman said, according to the Guardian.

Andrew has previously promised to help investigators with the case, but has since removed himself from public life. He has also refused requests for interviews that investigators have sent him. He has stepped down from his official royal position and is now more than ever the black sheep of the royal family.

After the arrest of alleged Epstein co-conspirator Ghislaine Maxwell, who is also said to be good friends with Andrew, the prince has canceled all of his travels and business trips outside of the UK, likely out of fears that he will be arrested as well.

According to a former member of the Royal guard who worked on Prince Andrew’s security detail, The London Metropolitan Police have destroyed evidence that could have revealed where Prince Andrew was on the night that he is accused of having sex with a teenager that was being trafficked by Epstein and Maxwell.

The night in question is March 10th, 2001, as well as the morning hours of March 11. Virginia Giuffre, who was known by the name Virginia Roberts at the time, says that she was taken to London by Epstein and Maxwell and was expected to have sex with Prince Andrew. Giuffre says that she was just 17-years-old at the time.