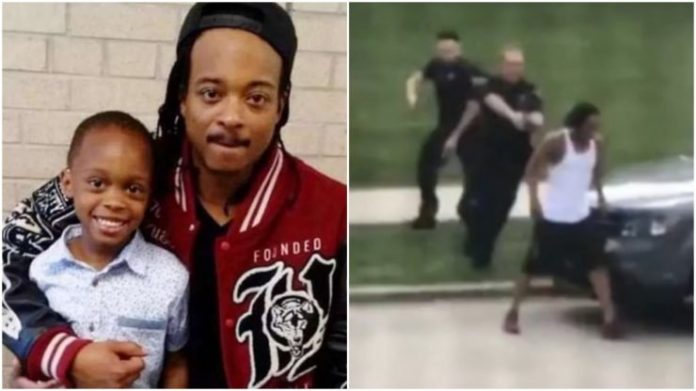 Jacob Blake, the 29-year-old man riddled with bullets by police in Kenosha, Wisconsin, is now paralyzed from the waist down.

Jacob Blake, the 29-year-old man riddled with bullets by police in Kenosha, Wisconsin, is now paralyzed from the waist down after suffering severe spinal damage and he now has “eight holes in his body,” his father says.

The life-changing injuries come after police officers fired several shots into Blake’s back in broad daylight in the full view of his children after he attempted to lean into his vehicle.

Blake’s father, who is also named Jacob, told the Chicago Sun-Times that his son is now in stable condition following surgery in a Minneapolis hospital but he is now paralyzed – and doctors don’t know if the paralysis will be a permanent disabling condition that will change the course of his life.

“I want to put my hand on my son’s cheek and kiss him on his forehead, and then I’ll be OK,” the senior Blake said, adding “I’ll kiss him with my mask. The first thing I want to do is touch my son.”

He explained that when he spoke to his son earlier Sunday, the younger Jacob was getting ready for a day of family celebrations for his own son’s eighth birthday.

Later that evening, the elder Jacob learned that his son had been shot by police while attempting to board his vehicle. A mere 18 minutes later, the father was horrified when he saw footage of his son being fired upon by police in video that has now gone viral.

This is the shooting video of Jacob Blake in Kenosha, WI. pic.twitter.com/yerWbsSxQU

When the police shot Blake, his three children were in the back seat of the vehicle, according to Blake’s partner and the children’s mother, Laquisha Booker.

“That man just literally grabbed him by his shirt and looked the other way and was just shooting him. With the kids in the back screaming, screaming,” Booker told WTMJ.

A second video has since emerged that shows Blake engaged in a scuffle on the ground with two of the officers. At some point, Blake managed to break free before walking to his SUV.

According to Raysean White, 22, who filmed the initial cellphone video, officers screamed “Drop the knife! Drop the knife!” during the altercation, but witnesses say they did not see a knife in Blake’s hands.

It remains unclear why the Kenosha officers saw fit to begin firing into the man’s back, but the officers have since been placed on paid administrative leave, as is the norm in officer-involved shootings.

According to witnesses, Blake was trying to break up a fight between two women before officers arrived at the scene.

Attorney Ben Crump, a high-profile lawyer who has represented the families of prominent victims of police misconduct and abuse – including Blake’s family – said that Blake was “simply trying to do the right thing by intervening in a domestic incident.”

The update on Blake’s health comes as anger and unrest continue to seethe in the streets of Kenosha as clashes continued for a second night, with police officers firing tear gas and less-lethal rounds into crowds of aggrieved and combative community members.

Protests over the police shooting of Jacob Blake entered a 2nd night in Kenosha, Wisconsin.

Police fired tear gas and the National Guard was called in to disperse protesters who shot fireworks outside the courthouse. More @business: https://t.co/ktHP40MwFV pic.twitter.com/rgSyGqpI85

Hundreds of residents defied an 8 p.m. curfew order Monday night to line up outside of the Kenosha County courthouse and refused to disperse despite being scattered numerous times by strong tear gas and flash-bang grenades, according to BBC.

Incidents of property damage, including graffiti and vehicles being set on fire, have also been reported.

Protesters have vowed to remain on the streets in spite of the repression and defiantly chanted “We’re not leaving” into the early hours of the morning.

“It is a breath of fresh air,” a young protester told BBC. “I am tired of being scared of the police killing me. Tonight they are going to listen.”

Wisconsin Gov. Tony Evers has requested that 125 members of the National Guard be deployed to Kenosha in a “limited mobilization” to “protect critical infrastructure” and ensure the right to protest for community members, according to a press release from the governor’s office.

The continued unrest in the Lake Michigan city threatens to rekindle weeks of explosive nationwide unrest that resulted from the May 25 killing of George Floyd by Minneapolis Police and saw the resurgence of a powerful movement against racism and police brutality, with protests occurring throughout the summer in hundreds of cities nationwide and internationally.

However, Jacob Blake’s father sees the Kenosha police as providing “the flint as well as the gasoline” for the unrest in the Midwestern city.

This is the shooting video of Jacob Blake in Kenosha, WI. pic.twitter.com/yerWbsSxQU