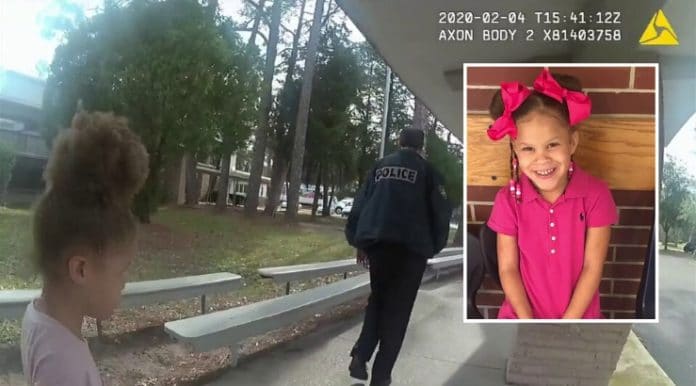 The mother of a 6-year-old Florida girl wants answers after her daughter was taken to a mental health facility following an incident at her elementary school.

According to her mother, Nadia Falk was traumatized by the experience of being involuntarily committed to a mental health facility last Tuesday.

The day began much like any other when Martina Falk sent her daughter to class at Love Grove Elementary School in Jacksonville, Florida. But Martina was ultimately unable to see her daughter until Thursday afternoon, at the conclusion of a mandatory 48-hour hold.

“Then, a couple of hours later, I got a call saying that she is so uncontrollable that they had to Baker Act her,” Falk explained. “They called me and said ‘Ms. Falk we’re calling to let you know that there’s nothing else we could do.’ There’s nothing else you could do for my 6-year-old? When she was taken to that hospital to be locked away in this isolation, seclusion room. They said they did that as an attempt to calm her down. My baby was scared. She wanted me.”

Martina says that 6-year-old Nadia was handcuffed before being taken away however, last week Duval County Public Schools (DCPS) told Action News Jax that the principal never saw the girl in handcuffs. The Jacksonville Sheriff’s Office (JSO) also maintains that Nadia was never in handcuffs. Nadia was heard asking: “Am I going to jail?” after the police were called in.

DCPS said in a statement:

“At no time, did the principal see the child placed in handcuffs. Once staff and the mental health therapist were able to deescalate the behavior, the child was escorted out of the school calmly holding hands with the principal and the police officer to the police officer’s vehicle. While we must always protect student privacy, I can tell you that Baker Acting a student is a medical intervention that is initiated upon evaluation by either a law enforcement officer or a licensed mental health professional based on specific criteria according to Florida Statute. In many cases, it is initiated by a mental health professional.”

According to her mother, Nadia was heavily sedated while at River Point Behavioral Health.

During a press conference, Martina told reporters that she was not intending to file a lawsuit. Instead she is seeking answers from the school and River Point Behavioral Health about what exactly happened to Nadia that day.

“Honestly, I just want to let the school systems know that this is not OK. If you have a child with any type of disability, they deserve an education. They don’t deserve to be hauled away like an animal,” Martina said. “That’s not a place for children. It’s a place for no one.”

In 2017, Nadia was diagnosed with ADHD and is currently taking medications as a result of her special needs as she awaits the results of an autism spectrum disorder (ASD) evaluation.

According to DCPS, a third-party licensed mental health professional made the decision to enforce the Baker Act after which law enforcement drove the 6-year-old to the hospital. Nadia’s mother said she was not informed of the situation until after the decision was made.

JSO reports that Nadia was attacking staff, destroying school property, running out of the school, and was acting generally out of control.

“If it’s a pattern of behaviors, then they should Baker Act, but if it’s isolated then we have to allow the parent to make a judgment call and say he or she would be ok at home let me take them home,” Dr. Amit Vijapura, a board-certified psychiatrist, said.

However, Nadia’s mother was never involved in the decision. “That’s not acceptable. I deserve to know whether my daughter was being difficult that day or not. She’s helpless,” Martina said. “I was assured they would take care of her and they had staff specifically trained to help her and this is the help I get—a psychiatric hospital.”

On Thursday, body camera footage of the incident was released showing Nadia waking to a police cruiser holding the hand of a female officer. Some of the footage is redacted and other parts are inaudible.

In a second video released by police from inside the cruiser, Nadia asks the officer if she has something to eat. The female officer can be heard telling another officer, “I think they may have agitated her a little bit.”

In response to the footage, the family’s attorney, Reganel Reeves, said:

What medical basis did they have to give this child anti-psychotic medicines? That’s what we need to know.”

“She’s my everything and I love her, and I’ll do anything to protect her and other children with disabilities.”

Despite what Martina previous said, Reeves now says, “I think it’s quite clear that a lawsuit needs to be filed.” Photographer Captures One of the Last Female Eagle Hunters of Mongolia26.2K Views