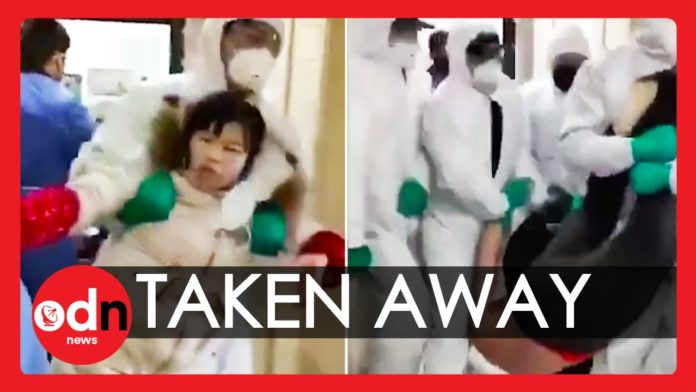 Shocking footage has emerged online showing suspected coronavirus patients being forcefully taken away from their flat in China.

In the video, officials in protective suits can be seen dragging away a man and a woman, while behind them a man lying on the ground is trying to resist being carried away.

The family of three had refused to self-quarantine after having returned to their home in Kunshan, Jiangsu Province, from Hubei Province, whose capital Wuhan is the epicentre of the outbreak.

As the man struggles to break free, three people carry him down a flight of stairs before the footage comes to an end.

The shocking video was shared to Radio Free Asia’s Twitter feed which alleged the three suspected patients were residents of Kunshan, Jiangsu who refused to comply with officials attempting to put them into isolation.

The exact situation unfolding in the video remains unconfirmed, but it comes as reports claim Wuhan authorities have begun going door to door checking temperatures and rounding up suspected patients for forcible quarantine in stadiums and exhibition centres serving as warehouses for the sick.

It’s been alleged that Chinese officials have also began arresting those who refuse to wear face masks.

More than 720 people have now died from the virus while at least 34,500 are infected across 27 countries, with five British nationals testing positive in the French Alps today.

Vice-premier Sun Chunlan, who has been put in charge of the national campaign against the coronavirus, reportedly said Wuhan and the rest of the country was facing ‘wartime conditions’. She said: ‘There must be no deserters, or they will be nailed to the pillar of historical shame forever.’

Friday marked the deadliest day for the illness in China, with 86 people tragically losing their lives. Up to 60 million people are said to be quarantined as the country desperately tries to stop the spread of the virus. An American citizen became the first foreigner confirmed to die from the illness in China today, while a Japanese man has also passed away after experiencing symptoms consistent with the virus. Foreign Secretary Dominic Raab announced this week that 150 Britons would be flown back from Wuhan on Sunday on one final UK-chartered rescue flight.