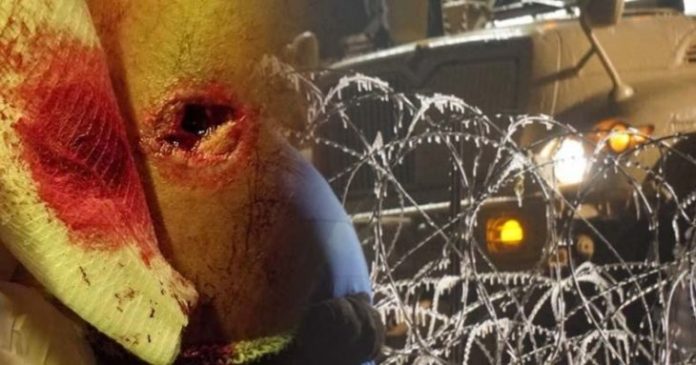 By: Claire Bernish / The Free Thought Project   Cannon Ball, ND — All water protectors must leave the camps — and abandon plans to relocate to a higher elevation — the Standing Rock Sioux Tribe Council wrote in a resolution passed during an executive session of a district meeting just before President Donald Trump took the oath of office.

Journalist and livestreamer Jon Ziegler — known better as Rebelutionary Z — met the full force of the law enforcement coalition led by the Morton County Sheriff’s Department on the front lines of brutal and indicative attacks on peaceful water protectors opposing construction of the Dakota Access Pipeline.

“All the individuals at all the camps in and around Cannon Ball need to leave the district,” Standing Rock Sioux Council resolved. “The building of an alternative site for the camp(s) within the Cannon Ball District is not needed or wanted. If there is to be any kind of a ‘site’ for the commemoration of this historic event that took place with all the tribes, the people of Standing Rock need to vote on where, what and cost before any ‘shanty town is built.’”

According to the Bismarck Tribune, “The resolution, approved by the full council Friday, applies to all of the protest camps in the area: Oceti Sakowin, Rosebud and Sacred Stone […]

“Cody Two Bears, the Cannon Ball district representative to the tribal council, said the district is requesting federal law enforcement aid in removing protesters from the district and setting up posts blocking those who do not live or work in the district from entering. The district requests these actions be taken in the next 30 days.”

“We need to take the fire that was lit here and burns within us and go back to our own respectful reservations,” Lewis Grassrope told the council.

A lone dissenter on the resolution, Ed Blackcloud, stood against the unpopular actions of the tribe, stating, per the Bismarck Tribune,

Police and U.S. National Guard were quick to capitalize on the tribe’s resolution, moving in shortly afterward in yet more aggression against the largely peaceful group who’d maintained semi-permanent encampments near the banks of the Missouri River since last April.

Miserably parallel to similar uses of unnecessary force, law enforcement inflicted targeted attacks against the both the unarmed and journalists documenting the scene Wednesday night.

Despite previous confrontations on Backwater Bridge, police remained behind their barricade to the north — until that night — when they crossed into the south side, in order to remove a tipi.

Water protectors quickly demanded officers return the tipi, and — upon being refused — began to construct another in its place.

As The Daily Hazereports, “Police reportedly went to the south side of the barricade once again and began using rubber bullets against water protectors to prevent them from being able to assemble the second tipi. This led to a standoff that went on for hours, until the police would cross the barricade for the third time.”

Ziegler livestreamed that crossing — and paid the price.

As his own camera recorded heightening police aggression, Ziegler noted the judiciously militarized police moving into sovereign land where no U.S. law enforcement would have a right to be according to centuries’ old treaties between Native Americans and the government.

For some time, the situation remained mostly a battle of insults and screams —  until the journalist learned firsthand the telling portent of the incoming administration. Someone yelled his name.

Audio seeming to emanate from the officers’ ‘side’ sends a chilling and direct portent of events immediately to conspire. An authoritative voice — quickly echoed — grunts, “Jon Ziegler!”

Mere seconds later, this wall of officers opens fire on the peaceful water protectors — the second or third rubber bullet fired hitting Ziegler in the hand and leg, as if a last resort to shut down the activist’s live stream.

“Fuck!!” he yells, “they’re hitting me in my fucking camera — you assholes!”

Ziegler immediately calls for medics, but ‘less-than-lethal’ force had already done its damage — he had to be transported to the local hospital for a viciously broken finger. Apparently, law enforcement purposefully targeted his camera — caring little for his personal safety.

Surgery went good (twice as long as expected). I'll be elevating my hand at hotel for a day or 2.
DR-"like a chicken bone smashed w/ hammer"

Ziegler tweeted just after midnight on January 21, “Surgery went good (twice as long as expected). I’ll be elevating my hand at hotel for a day or 2. DR-’like a chicken bone smashed w/ hammer.’”

Rebelutionary Z wasn’t the only person seriously injured in that confrontation — an unnamed water protector shot at close range by a rubber bullet was left with a gaping hole in the leg — proving less-than-lethal a purely relative description of such police weaponry.

Rebelutionary Z wasn’t the only person seriously injured in that confrontation — an unnamed water protector shot at close range by a rubber bullet was left with a gaping hole in the leg — proving less-than-lethal a purely relative description of such police weaponry.

Nat'l Guard, LEOs deliberately fire point blank to maim water protector. When the US imprisoned our people on these…

Posted by Lastrealindians on Thursday, January 19, 2017

Without the Standing Rock tribal council’s seemingly counterintuitive agreement to shut down the camps — regardless water protectors’ consent to move to higher ground to avoid spring flooding — police would have no reason or justification to move forward in forcefully clearing the area.

Many from tribes and Indigenous nations from around the planet, as well as their non-Native supporters, had intended to remain encamped in order to halt construction of the Dakota Access Pipeline.

Now, the rebels who so vehemently and thoughtfully sought to protect the integrity of the water supply of millions will are facing a fresh and expansive onslaught of law enforcement brutality — thanks to the tacit consent of the Standing Rock Sioux Tribe Council.

This article (While Americans Focus On DC, Cops Unleash Fury During DAPL Water Protector Eviction) by Claire Bernish is free and open source. You have permission to republish this article under a Creative Commons license with attribution to the author and TheFreeThoughtProject.com.