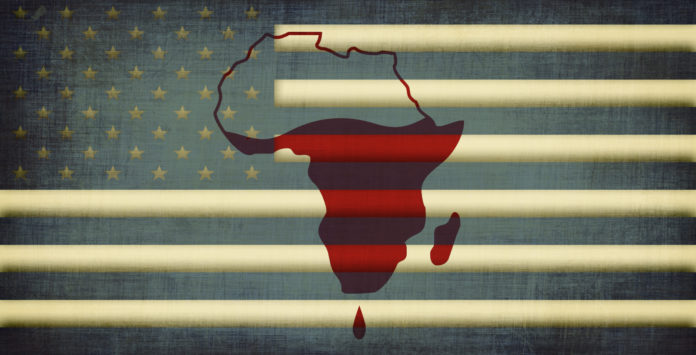 (MINTPRESS) WASHINGTON D.C. — The Obama administration has overseen an unprecedented expansion of American military might on the African continent, with dozens of bases and outposts opening there since he took office.

A Nov. 17 investigation by Nick Turse, a journalist and American military scholar, found that the United States maintains at least 60 bases or military outposts throughout Africa, although not all are actively used at all times:

“Some are currently being utilized, some are held in reserve, and some may be shuttered. These bases, camps, compounds, port facilities, fuel bunkers, and other sites can be found in at least 34 countries — more than 60% of the nations on the continent — many of them corrupt, repressive states with poorhuman rights records.”

Even that figure does not fully encompass America’s reach in Africa. According to Turse’s sources, the U.S. military operates “Offices of Security Cooperation and Defense Attaché Offices” in 38 African countries, while 30 others have agreed to allow U.S. forces to use their international airports as refueling centers.

Overall, Turse noted “that the U.S. military has created a network of bases that goes far beyond what AFRICOM has disclosed to the American public, let alone to Africans.”

The military is slowly lifting the veil of secrecy over its actions in Africa. Turse reported:

“For years, U.S. Africa Command (AFRICOM) gave a stock response: one. Camp Lemonnier in the tiny, sun-bleached nation of Djibouti was America’s only acknowledged “base” on the continent.”

Richard Reeve, the director of the Sustainable Security Programme at the Oxford Research Group, a London-based security think tank, told Turse that the U.S. is using AFRICOM as a “laboratory” where it can experiment with “a different kind of warfare and a different way of posturing forces”:

“Apart from Djibouti, there’s no significant stockpiling of troops, equipment, or even aircraft.  There are a myriad of ‘lily pads’ or small forward operating bases… so you can spread out even a small number of forces over a very large area and concentrate those forces quite quickly when necessary.”

After years of denials, the Pentagon has slowly begun admitting to the existence of some of its outposts, with a 2015 Pentagon list now including three “cooperative security locations,” ranging from a medical research facility in Egypt to a seaport in Kenya, and AFRICOM commander Gen. David Rodriguez admitted to the existence of 11 such sites in a May interview with military news publication Stars & Stripes.

This newfound transparency is likely a prelude to even more military expansion in Africa and elsewhere. On Thursday, The New York Times reported on a Pentagon plan to expand U.S. military might in Africa, Asia and the Middle East, under the pretext of defending against Daesh (the Arabic acronym for the group also known as the Islamic State, ISIS or ISIL) and other forms of Islamic extremism. Under the proposal, submitted originally by former Chairman of the Joint Chiefs of Staff Gen. Martin Dempsey, the military would create “hub” bases on three continents by expanding existing bases and cooperative security locations, then using those hubs to create yet more outposts throughout surrounding areas. Pentagon officials told the Times that, “[t]he hubs would range in size from about 500 American troops to 5,000 personnel, and the likely cost would be ‘several million dollars’ a year, mostly in personnel expenses.”

In his examination of the plan, Shadowproof’s Dan Wright questioned “whether or not support for such adventurism can be found in a nation whose population is exhausted and frustrated by a decade of military blunders and failure.”

This article (America’s Empire in Africa That You Haven’t Heard of ) originally appeared on MintPressNews.com and was used with permission.