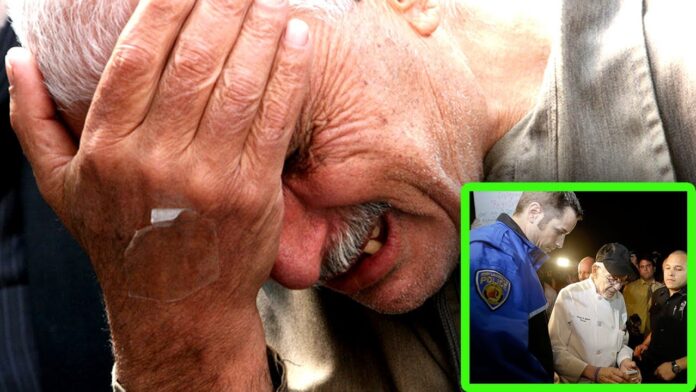 Amos Miller says he is being persecuted by the federal government for practicing his religious freedom to raise and prepare food the way he believes God intended food to be raised and prepared – in accordance with nature.

Miller practices rotational grazing on his small, holistically managed, century old farm in Bird-In-Hand Pennsylvania. His heritage-breed cows are raised on organic pastures, with the chickens following behind, eating the bugs from their dropping, and whey-fed pigs trampling all the fertilizer back into the ground after that.

Around 4000 customers of his private, members-only, food buying club are dependent on his meat, eggs and dairy products, as well as fermented fruits and veggies… and are willing to spend top dollar to get it shipped to them all over the country, as they don’t trust food from the grocery store.

But a couple of weeks ago, a federal judge told Miller to cease and desist all meat sales, and sent armed U.S. marshals to search his property, farm store and freezers. They took an inventory of all his meat to make sure he doesn’t sell any or slaughter anymore animals.

Last summer, the judge also ordered Miller to pay $250,000 for “contempt of court,” and said he will also have to pay the salaries of the USDA investigators assigned to his case, $50,000 of which was due last week as a “good faith” payment to avoid jail.

(The court’s next hearing on Miller’s case will be this Tuesday, April 12. Please show up if you can. Details below.)

So what exactly is Miller’s crime?

Slaughtering and processing the meat he raises on his own farm and selling it fresh-frozen to members of his private food buying club, who’ve all signed contracts stating they understand the meat is not processed in USDA-inspected plants, or treated with USDA-required chemical preservatives… because that’s how they want it, and the very reason they are willing to go to such great lengths to get it.

But the USDA thinks his customers are too stupid to think for themselves and need them to come in and protect them from themselves.

You probably don’t know (because I didn’t until Miller told me) that all USDA-licensed processing plants are required to treat ALL meat (even the local, grass-fed, organic variety) with synthetic preservatives.

“Often they use citric acid, which you’d think comes from oranges or lemons, but it’s a modified substance made from corn… and they don’t even have to label it on the meat,” Miller said.

“The USDA processing plants require the meat to be treated with a chemical cocktail of citric acid, lactic acid and peracetic acid,” said a customer who handles Miller’s website and other modern communications (because he’s Amish).

“The peracetic acid is toxic and the citric and lactic are GMO.”

“It’s not lactic acid coming from the fermentation of sauerkraut. It’s all created in a dish in a lab. It’s a synthetic sterilizer that causes many health problems,” Anke (who preferred not to use her last name) told me.

“Our members don’t want any of that,” Miller said. “They want fresh, raw meat, with no additives. Our members want it straight from the farm with no preservatives on it.”

“As a farmer, you could invest all your energy and money producing the most healthy, nourishing meat and at the end of the day, you are ruining your meat sending your animals to a USDA facility for slaughter,” Anke added.

Even if the USDA didn’t require preservatives and allowed the sale of organ meats, it still would still be nearly impossible for Miller and other small farmers to make a profit with Big Meat processors acting as middlemen. And the cost of becoming licensed by the USDA to process their own meat is too steep.

“The rules and regulations are such that you have to get into debt $100,000 before you ever sell your first pound of meat, and the market’s not guaranteed,” Miller said. “There’s no option for farmers to start small and add on and buy equipment as they can.”

“We have many small farmers in our area that would love to be farmers, but the business has gotten so monopolized.”

There should be separate regulations for large and small farms, Anke argued:

“There’s a big difference between processing 1000 animals a day or one per week.

We don’t need to track and trace every animal with an ear tag and report about each one to the USDA.

We slaughter one animal, distribute it among our members, and then, when the need arises, we slaughter another one. That’s how we eat. Our members are healthy and thriving and never want to go back to where they came from.”

What does the USDA label on your food doing to make your food safer? Nothing.

The chickens you buy from the grocery store — especially Tyson — have a built-in obesity gene. So they blow up in five weeks to heavy weight, and you eat this stuff! The cows are genetically manipulated to produce 6 gallons of milk per day instead of 2.”

Miller said he hears of small farmers going out of business every week, “and the past two years have been worse.”

“If the government continues this harassment of small farmers, the only option is to go out of business and that will create more food shortages more than ever.

They’re on the hot seat, not me… if they want to create a food shortage, we can’t blame God

China and Russia have it figured out. They have small farms all over. They have learned their lesson the hard way that that’s the way of sustainability. America has not figured that out yet, but they might just shortly.”

There are other small farmers who sell directly to their customers, why are they targeting Amos Miller?

“Because Amos has the most business,” Anke explained.

“People want his food. All over the country.”

The way Amos is farming is the way it’s supposed to be. We don’t need chemicals, we don’t need fertilizers.

Our fertilizer is the manure (which the USDA doesn’t allow because their animals are so sick and toxic). But our manure is, bar none, the best fertilizer you can have.

And fuel prices? Amos doesn’t use a tractor. He uses horses. We’re not effected by these shortages.”

Anke pointed out the hypocrisy that farmers are legally allowed to slaughter and sell water buffalo, rabbit and fish without a license:

“He can slaughter them in his backyard, at the front door, in his living room — it doesn’t matter — as many as he wants. There is no regulation for water buffalo or rabbit.

If it’s just about food safety, why don’t the buffalo and rabbit pose a food safety risk?

Because it’s all about profit and money. They want a monopoly on beef, pork and poultry.

It used to be in our country that you are innocent until proven guilty. They have no evidence, no proof. We have never been in court to debate accusations.

They are basically saying unless you go through federal inspection, you are making people sick.

If that’s true, I should be dead, because I’m drinking raw milk, I’m eating raw eggs, I eat raw liver. I am thriving on this type of food and so are many of our members.”

We want to turn it around and take the USDA to court, so that we are the prosecutors, and they are the defendants. Let them take a sample of our meat, take it to the lab and a get a sample of the bacteria and compare it to the meat they sell at the grocery store. But they won’t do that.”


Please support Amos Miller on Go Fund Me and attend his hearing at 1 pm on Tuesday, April 12, at the U.S. Courthouse in Easton, Pennsylvania. 101 Larry Holmes Drive (4th floor). Also tell your congress men and women to direct the USDA to stop harassing small, sustainable farmers who sell direct to private consumers, not to the general public in grocery stores or restaurants.