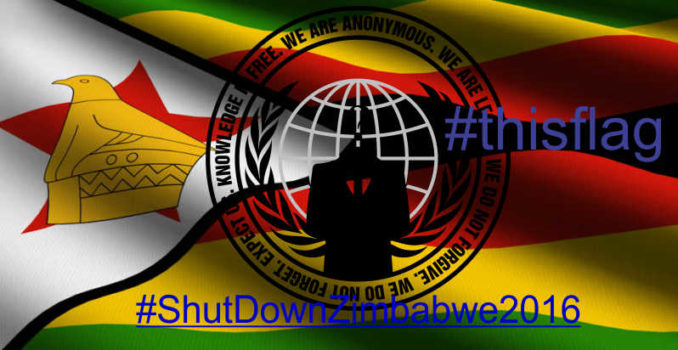 A group calling themselves Anonymous Africa has launched a series of attacks targeting the government of Zimbabwe and its President for what they are calling systemic corruption. The attacks come in conjunction with protests around the country; protests calling for the resignation of Robert Mugabe whom has been in control of the country for the last 36 years.

The operation, the group says, is not to be confused with #OpAfrica, a separate Anonymous operation aimed at exposing corruption, child labor laws and genocide across the continent. The “GMO hysteria” conversation they are referring to in the tweet below is largely centered in Nigeria, a country thankful for GMO’s as the country has continuously suffered from famine and a lack of crops.

We are not involved with #OpAfrica and their anti-GMO hysteria. Our targets are corrupt governments and corrupt corps, not science

Much like the Arab Spring of Egypt in 2011, the Zimbabwe protests have been organized almost exclusively through social media, more specifically through Whatsapp. Due to the effectiveness and growing numbers of protesters, the government of Zimbabwe has attempted to shut down the internet and banned local papers from reporting in order to preventing the movement from growing. Last Wednesday, the internet across the country was completely shut down.

Despite this, #ShutdownZimbabwe became the top trending topic across the continent and Anonymous has taken notice. Following the media blackout of the country last week, Anonymous launched #OpShutdownZimbabwe, a series of attacks against shutting down government web pages after the government attempted to shut down the internet for the people.

In support of #ShutDownZimbabwe we have shut down the ZANU-PF website. https://t.co/hqg6tpIF8f is #TangoDown Bring on the spring!

This article (Zimbabwe’s Government Shut Down The Internet, So Anonymous Shut Down The Government) is a free and open source. You have permission to republish this article using a creative commons license with attribution to the author and AnonHQ. Join the conversations at www.anonboards.com.