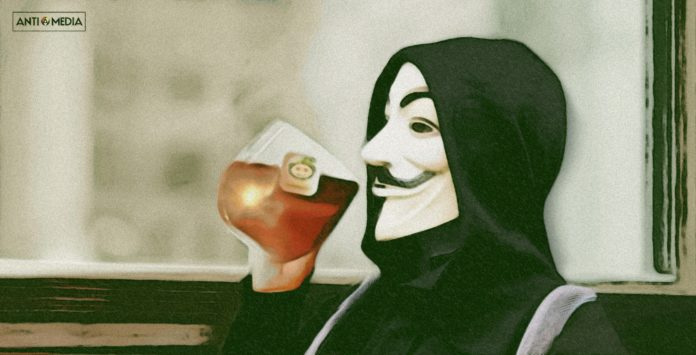 United States — Anonymous just pulled a fast one on Donald Trump, his campaign staff, the Secret Service, and the FBI — in one brilliant and telling fell swoop.

To support the White Rose Society and the White Rose Revolt, which began as a response to fascist leanings by Trump and his supporters, Anonymous launched #OpWhiteRose — and the billionaire presidential hopeful fell right into the ‘trap.’

On Friday, Anonymous announced it had released Trump’s personal information online — including such details as his cell phone number and Social Security number. Backlash from the Trump front promptly followed, as well as an announcement from the Secret Service and FBI that an investigation had begun.

However, the information had not been hacked or leaked. In fact, everything Anonymous posted had been online — and available for anyone to see — for years.

Anonymous RedCult released a second video to explain the ruse, in which the narrator explains the information “was online since 2013.” Indeed, as the video states, “The government and law enforcement authorities are seeking the arrest of the people responsible for attempting to illegally hack Mr. Trump’s accounts and telephone information.”

Why law enforcement at every level was so quick to pounce on a non-crime and effect arrest of those behind it — without investigating whether a crime had even been committed — paints a telling portrait of exactly the fascist tendencies Anonymous wished to prove.

RedCult included a snippet of ABC News coverage of the non-hack, which reports it as if it were a serious crime. Again, this information has ostensibly been available on the internet for years — so, as the narrator points out, “Trump want[s] to turn America into a fascist dictatorship where anyone can be arrested for just posting old information online.”

It’s arguably not far from the truth.

Indeed, as Trump indiscriminately aims his hatred of the press, protesters, activists, and anyone who disagrees with his twisted vision for the future, Anonymous might have proven a crucial point.

“Thank you Trump and Trump campaign. Thank you police, FBI, and the Secret Service for being a part of our little experiment on how we should expect the so-called New America will be,” the narrator stated.

Whatever your feelings about the collective known as Anonymous, the experiment was a frightening, facile ‘success’ — of sorts.

Though the joke was on Trump this time, it proves his fascist tendencies are nothing to joke about.

This article (How Anonymous Just Fooled Donald Trump, the Secret Service, and the FBI) is free and open source. You have permission to republish this article under a Creative Commons license with attribution to Claire Bernishand theAntiMedia.org. Anti-Media Radio airs weeknights at 11pm Eastern/8pm Pacific. If you spot a typo, email [email protected].