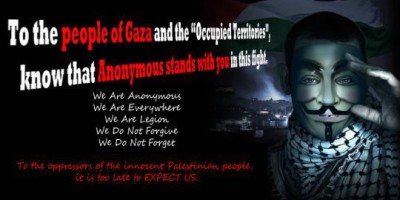 A group of Anonymous known for comprehensive attacks and intelligence gathering against the Islamic State has shifted their focus, for one day at least. Yesterday, April 7th Red Cult targeted 55 separate web pages affiliated with the government of Israel, not to to be anti-semetic but to remind Israel that their occupation of Palestinian territories is illegal and violates international law – “something Israel must be reminded of everyday”

Anonymous came out with a promotional message about the attacks on April 6th and no sooner than they released a list of websites, the Israeli government released a statement of their own. In an official statement to the Times of Israel, government officials affiliated with domestic security announced “We are prepared for all forms of aggression. Israel is well-protected.”

A claim to which Red Cult responded “Whatever precautions you have planned, Israel, your cyber shell is as fragile as your state of oppression.” The fight against Israel has become something of a tradition within small circles of Anonymous with attacks occurring every April 7th since 2013.

This article (Anonymous – Red Cult Attacks Israel on Holocaust Remembrance Day) is free and open source. You have permission to republish this article using a creative commons license with attribution to the author and AnonHQ. Join the conversation at www.anonboards.com