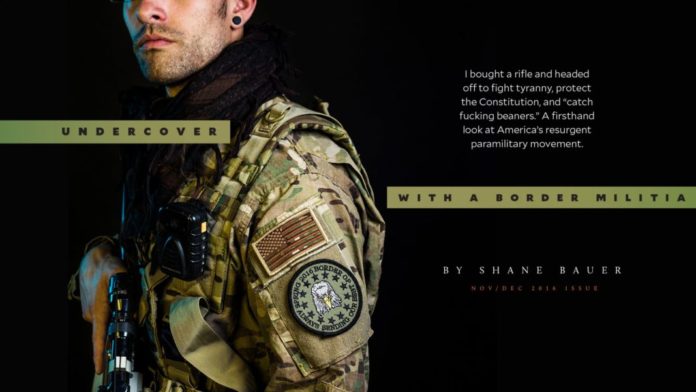 In an exposé from Mother Jones, award-winning freelance journalist, Shane Bauer, went undercover to report on the right-wing militia movement in America. Using Facebook, Bauer joined the III% United Patriots militia – one of the largest nationally organized militias in the U.S. – and then joined them on the U.S./Mexican border for “Operation Spring Break,” a vigilante mission to catch undocumented immigrants.

Bauer gives a riveting account of his experience with the group that provides an eye-opening – and alarming – view into the quiet battlefront that is unfolding on the U.S./Mexican border, as well as the activities of many U.S. militias. A large majority of the individuals in these groups appear to be disgruntled white-men who, over the decades, have increasingly felt cheated by a system that they feel now caters to minorities (and women). Such was the case with the three Kansas militia members who were recently charged with plotting to bomb an apartment building housing 120 Somali Muslims.

The III% United Patriots (3UP) are part of a different movement called The Three Percenters that believe the American Revolution was won by 3% of the population, and with 3% of the population today, they believe they can restore the United States Bill of Rights. Many members of 3UP in particular are ex-military, and are attracted to the militia not only for the sense of comradery, but also for the border missions, which reminds them of being back in battle.

In many ways, 3UP actually shares a lot of the same sentiments about the government as most citizens who are realizing the full extent of corruption within the establishment, and like many of us, they feel like “sheepdogs in a nation of blind, ignorant sheep,” to quote Bauer’s report. And yet, their philosophies are mixed with extreme right-wing contradictions.

For example, they realize the U.S. government is more than willing to go to war with its own citizens, which we see happening now at Standing Rock, and they consider this unconstitutional… but apparently only when it’s perpetrated against a white man, like with the case of Randy Weaver. 3UP founder, Mike Morris, claims membership “exploded” after the Ferguson protests, but not because they saw the federal government going to war with protesters (do you remember seeing any militia members standing against the militarized police in Ferguson?), but because of the BLM movement.

In related news: Why the Law Turns a Blind Eye to Militias

While 3UP maintains they are not a white-supremacy group, many of their members express white-supremacist ideals, and those who do not share their sentiments say nothing in order to avoid arguments over politics. Many of the men Bauer got to know during his time undercover expressed alarming views, with some stating that their purpose is to “hunt Mexicans.”

One thing is clear of all who take part in the vigilante border missions; they are more than willing to shoot if necessary, and in fact, they make it clear it’s what they hope for. Militia members are instructed not to shoot, should they encounter undocumented immigrants, but rather they are to call it into base, who then notifies Border Patrol. According to Bauer, however, “it’s not hard to imagine a situation in which they’re shooting somebody.”

Border Patrol and local police, in the meantime, not only condone the militia’s border operations, but express gratitude, and even provide tips. It’s relevant to point out that the vast majority of states have laws that ban militia-training, or paramilitary training, and some states have laws that outright ban militias and private army’s altogether, however these laws are widely ignored by authorities.

To be fair, not all U.S. militias are full of extremists, and at one point in American history, the existence of militias was considered a good thing; they were meant to defend the public, and keep the government in check, (Wills, 1999, p. 27). But even then, the protection really only applied to white citizens, as African-Americans were still enslaved at this time, and Native-Americans were packed off to reservations. And unfortunately, there are even more divides today than there were 200-years ago when you take into account all of the new issues that are being stacked on top of the old ones, such as the current Muslim-scare.

A large majority of U.S. militias today have their own, specific agendas that don’t often include “defending the public,” since so much of the public now consists of those they consider a threat. At what point do we stop recognizing some of these groups as militias, and instead recognize them as terrorist organizations?

Provided below is an interview with Democracy Now that Shane Bauer took part in to discuss his exposé in further detail, however we highly recommend reading his report – which includes photo and video evidence – in full for yourself.

This Article (Armed Militia is “Hunting Mexicans” With Collaboration from U.S. Border Control) is a free and open source. You have permission to republish this article under a Creative Commons license with attribution to the author and AnonHQ.com.