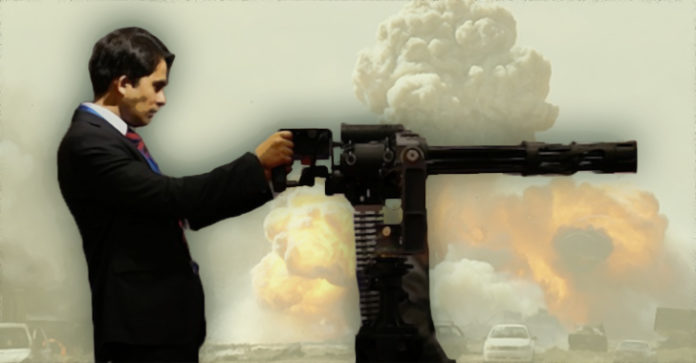 In the heart of London Docklands this September, international arms dealers will be schmoozing over cappuccinos and paninis in the bi-yearly “Defence & Security Equipment International” arms fair.

As the Middle East burns and U.K. discourse on human rights becomes increasingly threadbare, it will be business as usual for the profiteers, as the DSEI fair promotes everything from bullets to battleships. Between the 15th-18th of September, London’s ExCeL centre will morph into a big boys’ playground, witnessing deals that reinforce Western militarism and strengthen authoritarian regimes throughout the world.

According to the Campaign Against Arms Trade, Saudi Arabia is Britain’s most prolific weapons buyer, with the U.K. government licensing over £3.8 billion worth of arms to the Gulf regime since 2010.

In Yemen, it is civilians who are bearing the brunt of British-built warplanes flying overhead, with over 2,000 killed since March 2015 and 80% of the population currently requiring humanitarian assistance. Earlier this year, Foreign Secretary Philip Hammond pledged that Britain would support the Saudi-led assault “in every practical way short of engaging in combat.”

The London arms fair is a crucial event for those in the war business. Let’s take a look at who may be there.

This year’s event boasts 1,500 exhibitors ‘‘in a list that is growing daily.” The 2013 fair hosted arms companies from over 50 countries, selling everything from small arms and warships to surveillance equipment and riot control gear. Information on some of the larger companies involved is listed below:

Information on countries participating this year is scarce, though the list of those invited to the 2013 fair goes some way towards painting a picture of who may have been present then.

Fourteen of those invited to the last event represented authoritarian regimes, 9 were identified by the U.K. Foreign Office as having ”the most serious wide-ranging human rights concerns” and 9 on the list were actually at war when invited.

These deals are not just about the buying and selling of weaponry and military equipment. Nor are they just about fuelling conflicts, silencing dissent, and aiding those committing brutal human rights violations. This is about the purchase of silence from a government that claims to respect human rights and democracy. Not only is the U.K. government turning a blind eye, it’s actively pulling up the drawbridge when a handful of the 50 million globally displaced by conflict attempt to seek refuge in the UK.

You can’t make this stuff up.

Aiming to disrupt the event (as well as build networks of solidarity), anti-arms trade campaigners with Stop the Arms Fair coalition are holding a week of action from the 7th-12th of September of this year.