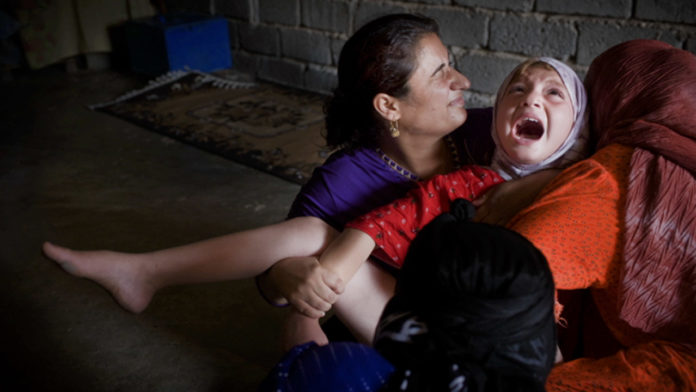 Female genital mutilation (FGM) has been illegal in Egypt since 2008 but the epidemic is still a must in poorer communities and the norm continues to haunt millions of schoolgirls in this part of the world. According to a UN report, of the more than 125 million girls and women alive today who have undergone the procedure, one in four live in Egypt. According to a government report released in May, 92% of married Egyptian women aged between 15 and 49 had been mutilated – 72% of them by doctors. Most females undergo the procedure aged between 9 and 12 during the summer school break so that they can recover at home. The most common FGM procedure in Egypt is Type 1, the partial or full removal of the clitoris.

While the UN maintains FGM is a gross human rights violation, has no medical benefits, or religious grounds, and can cause lifelong physical and emotional trauma for the women, the practice remains woven into the very fabric of Egyptian society, where many see cutting as a way to “purify” a girl and make her marriage material.

Mona Mohamed, who was 10 when she was forced to get circumcised, was told by her mother that “girls at your age get ‘excited’, and this operation takes care of that”.

“People used to have a party after a girl was circumcised, they’d celebrate and exchange gifts. So for them to turn from there and say, ‘look this is a crime or this is a sin or this is not allowed by religion’ means confronting a lot of beliefs and social norms,” Jaime Nadal-Roig, the UN Population Fund representative in Cairo, told CNN.

“The battle against female circumcision is a fight for the middle class,” said Vivian Fouad, the National Population Council official leading the government’s charge to eradicate FGM, adding, “Too many doctors are still willing to take the money from families and look the other way when it comes to the law. It’s a good income for doctors. And some doctors have social and cultural backgrounds where FGM is supported. If doctors, judges, prosecutors, and teachers are supporting FGM, how are we going to convince poorer women not to have it?”

“It gives the girl more dignity to remove it. If your nails are dirty, don’t you cut them?” one doctor in northern Egypt, Ahmed Almashady, told the Guardian.

In January, Egyptian doctor Raslan Fadl was convicted of manslaughter and performing female genital mutilation that led to the death of 13-year-old Sohair el-Batea. He was sentenced to more than two years in prison – the first conviction of its kind since the 2008 ban went into effect. The health ministry and the UNFPA are retraining 1,000 doctors a year about the dangers of FGM.

Last week Egypt announced a plan to reduce FGM by 10-15% in the next five years. “It’s an ambitious plan, but now I think that the political atmosphere is supporting us and we can reach our goal. For years we were on (the) defense, but now we’re on the offensive,” said Fouad.

The UNFPA has hired a theater group that performs skits in the streets across the country to foster debate about the necessity of FGM. “Many of these people are shy. When we used to do seminars on FGM it was very difficult to get people to speak up and ask questions. These plays act as an icebreaker that opens up the subject like magic. And women get to see in a comedic way that FGM is ridiculous,” said UNFPA program officer Germain Haddad.

The change has also been reported in the religious sphere. Mohamed Suleiman, a leading imam, claims because the liberal-minded imams have become more vocal in their criticism of the practice, the number of imams who support FGM in his network has fallen from an overwhelming majority to a significant minority in the space of just a decade.

This Article (Egypt Fights Female Circumcision That ‘Takes Care Of Excited Girls’) is free and open source. You have permission to republish this article under a Creative Commons license with attribution to the author and AnonHQ.com.