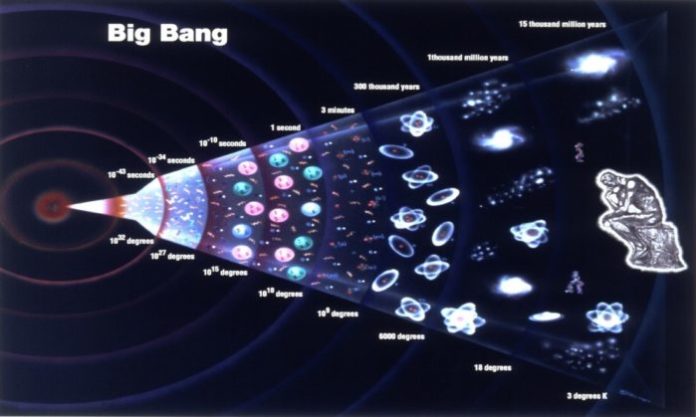 Science is simply a systematic activity that builds and organizes knowledge in the form of testable explanations and predictions about the universe. It deals with empirical evidence and reason.

From classical antiquity till date, many people have attempted to use empirical evidence to explain how the universe came into being. Before the advent of science, people in the ancient world had relied on religious and mystic beliefs to explain the creation of the universe. But the arrival of science changed the belief of man regarding the universe. Particularly in the 20th Century, science made giant leaps of progress. Humans were able to go into space, even walking on the moon. But despite the progress, scientists couldn’t agree on how the universe came into existence – there were theories and counter-theories. Of course, many scientists have attempted to explain how the universe came into existence. These explanations have generated hot debate in the scientific community. In 1949, on a BBC radio broadcast, English astronomer Fred Hoyle coined the term ‘Big Bang.’ The Big Bang theory states that the universe expanded from a very high density and high temperature state. Although Hoyle himself later rejected the Big Bang theory, many scientists believed that about 13 billion years ago, all of the energy, space, time and matter in what eventually became the universe was compressed into a singularity, a tiny point. Force caused this point to expand, and it has continued to expand ever since.

To some extent, the Big Bang theory is derived from the mathematics of general relativity, but there are some weak points in it. One of these points is that it can only explain what happened immediately after the Big Bang, but not before.

This weak point has led to researchers revising their Big Bang notes. Two astrophysicists have argued in a new study that the Big Bang may never have happened, meaning the universe may have existed forever. Dr. Ahmed Farag Ali of Benha University, Egypt, in collaboration with Professor Saurya Das of the University of Lethbridge, Canada, have theorized a series of equations that present an eternal universe with no beginning nor end. In fact, their theory complements Albert Einstein’s theory of General Relativity with quantum corrections.

According to The Mind Unleashed, this new theory propounded by the two astrophysicists could even explain dark matter and dark energy. Dark energy is an unknown form of energy that is hypothesized to permeate all of space, tending to accelerate the expansion of the universe. Dark matter, on the other hand, is an unidentified type of matter comprising approximately 27% of the mass and energy in the observable universe that is not accounted for by dark energy. Scientists widely agree that dark matter, together with dark energy form approximately 95% of the total content of the universe. In their work, Dr. Ali and Professor Das used the ideas of David Bohm, an American theoretical physicist, to make quantum corrections to an equation developed by Indian physicist Amal Kumar Raychaudhuri (the so-called Raychaudhuri’s equation), thus combining elements from both quantum mechanics and general relativity. As a result, they got a universe that was much smaller in the past, but never existed as the infinite density point.

In their work, the two astrophysicists pointed out the weakness of the Big Bang Singularity. Dr. Ali was quoted as saying: “The Big Bang singularity is the most serious problem of general relativity because the laws of physics appear to break down there.” On dark energy and dark matter, Ali and Das suggested that the two components of matter may be derived from a Bose-Einstein condensate, a state of matter in which particles display macroscopic quantum phenomena. This condensate existed in the early universe and may have been formed by gravitons – hypothetical particles that flood the universe and carry gravity but have no mass.

Although the theory by Ali and Das is not a full theory of quantum gravity, some scientists have said it is a major attempt to unite quantum theory and general relativity. Other scientists are also studying their theory carefully, probably to find further weaknesses in order to critique it.

This article (Astrophysicists Use Quantum Equation to Prove Big Bang Never Occurred, Conclude Universe has No Beginning) is a free and open source. You have permission to republish this article under a Creative Commons license with attribution to the author and AnonHQ.com.