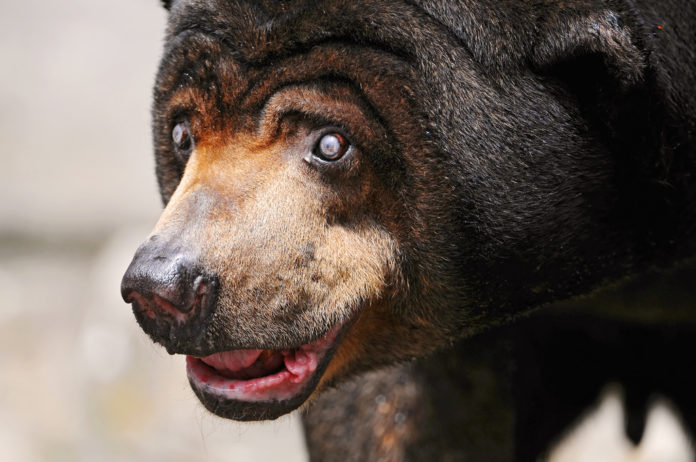 Social media has provided us with one of the greatest platforms for sharing some of the funniest, cutest and inspiring events that have been documented on video. Among these collections, is a video of a hairless “strange creature” that was filmed by plantation workers in Indonesia.

The video, which shows the hairless creature crawling over a pile of dry palm fronds, went viral on social media platforms such as Facebook. However, since the video was shared, the heartbreaking story behind the footage has been revealed.

The creature within the video has been identified as a sun bear, the smallest member of the bear family. Sun bears are reclusive animals that live in lowland forests of Southeast Asia. Many of these forests have been cleared for plantation development and illegal logging.

“None of us has ever seen such thing. One of us then hit the animal until it appeared to have passed out,” said one of the workers. “It could be a rare species of bear. When it regained consciousness, we forced it to go back into the jungle.”

Populations of this rare species of bear have fallen by more than 30 percent in the last 30 years. Today, the sun bear is listed as ‘vulnerable’ on the International Union for Conservation of Nature (ICUN) Red List of Threatened Species.

“It is clearly a sun bear,” Anthony Sebastian, head of the Malaysian Nature Society Kuching told the Malaysian Star. “What confuses people is the lack of fur. It is not some strange alien that has fallen from the sky.”

“A local endangered bear gets the living daylights beaten out of it, is filmed, and paraded on the interwebs as a ‘freak of nature’ or a ‘monster,’” the group writes on Facebook. “This is not right.”

While it has been confirmed that the animal depicted in the footage is indeed a threatened sun bear, the nature of the bear’s hairless appearance is still uncertain. It is speculated that the bear had lost its fur as a symptom of disease or suffered abuse from humans, according to members of the conservation group Naturetalksback.

Although the video in question become a viral sensation just last month, the footage is said to have been recorded last year. Sadly, it was discovered that the bear was suffering from cancer, as well as a number of other serious health conditions. On May 18, 2015, the Sarawak Forestry Corporation announced the bear’s death.

“The animal had not been eating well and vomiting. Worrying for its health, emergency medical intervention was performed under sedation. It was also fed with fluids through IV and food through a stomach tube,” SFC said in a press statement.

“Unfortunately, it succumbed to late-stage cancer with metastatis in the lymph nodes and adjacent organs as well as obstruction in the stomach due to primary tumour with origin in the stomach or pancreas.”

SFC added, “A detailed examination of the bear also revealed that it was in fact a very old bear and not just a full adult as previously thought.

“Cancer aside, the bear had probably reached the end of its natural life span.”

The sun bear was captured at an oil palm plantation in Bintangor on April 2 and was sent to the Matang Wildlife Centre for rehabilitation.”

Unfortunately, the sun bear’s documented demise is not unique. Last month, video footage of a polar bear stroking a dog gained widespread fame on social media. Although the scene may appear to show an unusual and cute bond between two unlikely animals, the reality behind the video has devastated viewers.

The video was filmed at a property a short distance from Churchill, Manitoba. At the property, tourists can pay to see polar bears interacting with the owner’s sledge dogs. The dogs are left chained outside the property and fed raw meat, which attracts the local polar bears. Acting on their natural instincts, the polar bears ultimately maul the chained dogs to death and enjoy their easy meal.

The reality behind these videos demonstrates the man’s impact on the world’s wildlife. Surprisingly, many online users are contributing and promoting these practices by unknowingly sharing footage of these cases on social media as a source of entertainment.

This article (Social Media Kills: The Truth Behind Viral Video of the Strange Creature) is a free and open source. You have permission to republish this article under a Creative Commons license with attribution to the author and AnonHQ.com.