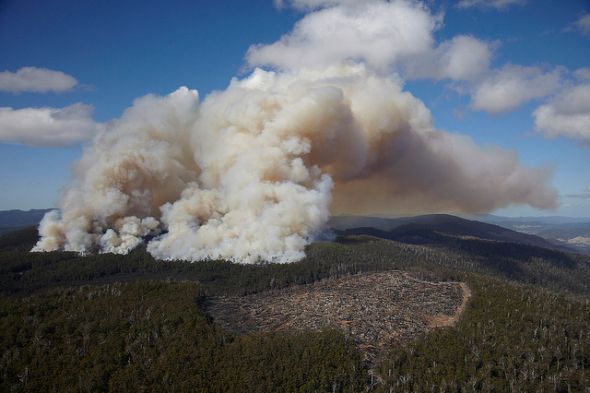 It’s devastating the wildlife; a barbaric act by a capitalist country gone awry. There is no sense of regret by those greedy enough to destroy thousands of years of history. They poison the rivers, land is forever destroyed, biodiversity ruined. Those responsible will go to all lengths to silence protestors and journalists. One even fired a shot a Senator Bob Brown years ago. It still happens today.

What am I talking about? Surely a scene from the Amazon in South America, or African poachers? No. I’m talking about the acts occurring in one of the world’s most pristine locations: Tasmania – Australia. The scenes I’m describing are little known to the locals – unless you’re protesting. The cover-up is one conducted by those with immense talent.

Tasmania is an island below the coast of the Victorian State. Australia’s far southern state that most forget about. However, ‘Tassy’ is home to primeval forests, some of the purist mountains and river waters, and marsupials, not to be found anywhere else in the world. The natural resources are nothing short of amazing, but yet, they are being napalmed into oblivion. The logging industry rules the roost in Tasmania. Rainforests, thousands upon thousands of years old, are being “clearfelled and then burnt with napalm,” says Richard Flanagan in 2004. The pleas to stop this ridiculous act that sees these trees sent to Japan to become paper sold back to Australia, have fallen on deaf ears.

“The world’s tallest hardwood trees, eucalyptus regnans, are being reduced to mud and ash. And the monocultural plantations that replace the old growths soak up so much groundwater that rivers are drying up.”

It was reported that in 2014, ‘napalm bombing’ was to be used in the Tasmanian Wilderness World Heritage Area. Senator Bob Brown, an advocate for protecting Tasmanian rainforests, said in a report, that those supposedly protecting the environment have become hypocrites.


“Green groups are now saying harvested forests can be regenerated to world heritage quality yet they continue to claim that the very act of forest harvest and regeneration destroys them forever.”

In 2015, now ousted PM Tony Abbott called for a delisting of the world heritage forest, despite warnings, including delisting 74,000 hectares. The  application, thankfully was rejected by the UN’s world heritage committee. The government’s argument at the time though, was that logging had already impacted the site, so, well, let’s continue it.

This was contrary to his election promises to halt the damage done, reverse it, and help locals who lost work through the logging industries’ actions.

It’s a mind-boggling situation. Multi-million dollar SLAPP lawsuits have been filed against Senator Bob Brown and those protesting. In Gunns v Marr, Australia’s largest “strategic lawsuit against public participation,” was recorded in history. It became a case study for corporate Australia, but one on “how not to deal with community protest.” The company was brought to its knees, along with its Japanese customers and European partners; though has still survived. Greenpeace, this year have decided to use imagery in their campaigns of the aerial views of Tasmania’s ravaged forests from bushfires that claim aren’t normal. “These are not normal bushfires, we’re seeing 1,000-year-old heritage-listed trees that aren’t meant to burn,” Greenpeace forest campaigner Jessica Panegyres said, suggesting other things are perhaps at play.

A report submitted late in 2015, to oppose calls for harvesting “special species of timber in Tasmania’s Wilderness World Heritage Area,” have been called a sham by the Liberals, those from the same party as logging industry supporter Tony Abbott. The report, done by members on an “international mission” have been described as environmental NGO’s, not UNESCO, and so should be ignored.

“There are obvious signs of undue influence from environmental NGOs … such as Environment Tasmania and the Wilderness Society,” Andrew Denman from Timber Alliance said this year. Not that it’s exactly a strong argument to justify ignoring research, is it? The fight still continues. Tasmanian rainforests continue to suffer at the grasp of a logging industry that benefits mainly offshore customers. Bushfires have ravaged other areas where fires normally wouldn’t be witnessed. The delicate ecosystem is off balance, and local cabinetmakers and carpenters are slowly going out of business because they no longer have access to local timbers. When will the madness end?

This article ([Investigative] Australia is Napalming its Ancient Rainforests) is a free and open source. You have permission to republish this article under a Creative Commons license with attribution to the author AnonWatcher and AnonHQ.com.