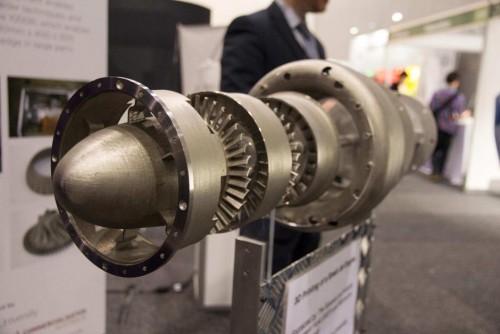 While half the world is still uptight over the possibility of people using 3D printers to manufacture guns and other weapons, researchers at Monash University in Melbourne Australia along with brilliant minds from CSIRO (Commonwealth Scientific and Industrial Research Organization) and Deakin University have succeeded in creating the world’s first 3D printed jet engines. There are two and no, they are not plastic. They are complete metal duplicates of a working turbine produced by the Microturbo Corporation. Although it’s not the current technology this model of engine is still currently used in aircraft such as the Falcon 20 jet and was chosen for the project because Microturbo would allow the internals to be shown publicly for the project.

With the T’s crossed and I’s dotted, the first steps in an experimental project involving hundreds of hours of work were taken. Once the engine was received by the research group, it was disassembled and every single piece was scrubbed, cleaned, measured, scanned, blueprinted and had a computer program assembled so it could be copied. Using a “large format” 3D laser printer (one of only three that exist in the world) parts identical to the originals were produced, inspected and assembled over the course of about a year. Yes, ONLY a year for the very first one ever in existence. Now that all of the necessary programs and instructions are in place it would only take days to copy another one as opposed to roughly 6 months in a traditional manufacturing process.  As of now, neither of these engines has actually been bench tested to see if they run and hold up to the stresses. I would imagine that since the 3D print is an exact duplicate of the original, it  would spin right up without hesitation. There are no doubts of functionality from here.

In order to protect and market these new breakthroughs, Monash University has also set up a private company named Amaero to handle the commercial end of things.  Simon Marriott, the incoming CEO of Amaero, announced that they plan to have printed engine components in flight tests within the next 12 months and certified for commercial use within the next two to three years. You can check out a short video of the project here:

Is this anything less than a milestone accomplishment? I think not. This is an all-around win for the researchers, the University and could very well be the jumpstart Australia’s struggling manufacturing industry needs. They are at the point of being able to corner the market on this technology despite the other two machines being located in Germany and France. There’s already talk of secret prototyping being done for Boeing, Airbus, Raytheon and of course, Safran.

Think of the endless amount of possibilities there can be when all that you need is the printing machine, a 3d scanner and the correct raw material. This is the “stuff” science fiction and fantasy books are made of. Any place in the world that leaves you with a limited amount of space, storage or facilities… oil rigs in the middle of the desert or the ocean, space exploration, the replacement of an otherwise shattered bone in a person’s body or automotive parts just to name a few. It could easily allow for the elimination of expansive warehouses of spare parts that will age and decay if not used. The birth of near infinite manufacturing abilities is within our reach if we can keep our world together long enough.