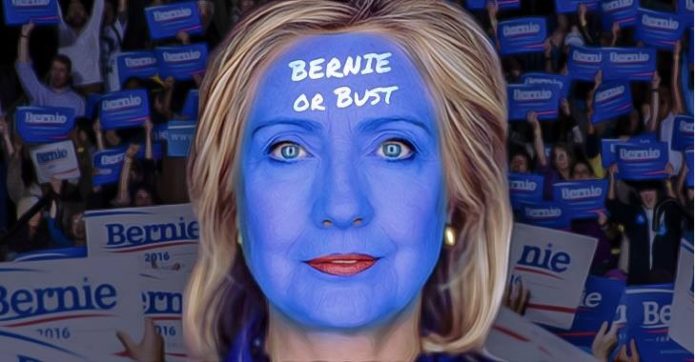 Sen. Bernie Sanders’ supporters don’t lack in enthusiasm, as a cursory perusal of social media proves. In fact, mainstream media once likened their zealotry to that of an “unhinged cult.” And now, with Hillary Clinton all-but cementing the Democratic nomination, the Bernie-or-bust crowd has drawn a line in the proverbial sand: nearly half of voters who support Sanders refuse to capitulate to the Democratic establishment by casting a vote for Clinton in the national election.

According to a recent national poll from Bloomberg Politics, just over half, 55 percent, of the Vermont senator’s followers said they would toe the Democratic Party line by voting for Hillary. Twenty-two percent would rather vote for her putative nemesis, Donald Trump, while 18 percent claim they’ll abandon the Democrat-Republican duopoly entirely by supporting Libertarian candidate, Gary Johnson.

Despite the coordinated effort by the corporate media to proffer Hillary as a viable, acceptable candidate — by both downplaying his followers’ dedication and mocking their devotion as obstinate foolishness that could land Trump in the White House — many of Sanders’ proponents remain steadfastly undeterred.

Indeed, as the poll proves, an arguably bigoted demagogue and a third-party quasi-outsider have nearly the same appeal as the Democratic establishment’s darling — and the sheer volume of voters who balk at the prospect of voting Clinton has exploded in just three months’ time.

In March, a joint poll by the Wall Street Journal and NBC, cited by the Nation, found nearly one-third of people backing Sanders would not cast a vote for Hillary should she secure the nomination — and just under 120,000 voters have agreed to either write-in Sanders or vote Green Party by taking the Bernie or Bust pledge. Similar sentiment exists in the dual NeverClinton and NeverHillary movements.

Democratic Party hardliners and sticklers have denounced Sanders’ bid for the presidency as extraneous and potentially detrimental to Clinton’s White House hopes — but with poll numbers remaining steady, and with Bernie garnering the only favorable views among voters, in general, it’s conceivable the opposite is true.

If the number of voters vociferously vowing not to cast a vote for Clinton continues to skyrocket, isn’t the former secretary of state, in actuality, blocking Sanders — and the Democratic Party — instead of the other way around?

Tellingly, the poll also found a paltry 5 percent of Sanders’ supporters would even consider backing Clinton anytime in the future — a microscopic margin of malleability when considering both a Bloomberg and additionalpolls show Hillary’s lead over Trump narrowing considerably in recent days.

Considering Clinton’s mendacious campaign, with its rather suspect success throughout the primaries — how many ardent Hillary fans have you met? — the rhapsodic loyalty among Sanders fans seems natural.

“There’s zero percent chance that Hillary Clinton could ever get my vote,” Perry Mitchell said, concerning the latest survey as quoted by Bloomberg quoted voter. “She’s a corporate candidate. I don’t vote for corporate candidates. I don’t do the lesser of two evils.”

Mitchell has plenty of company — even from the grave.

So far this election cycle, the Washington Post reported, vociferous pledges warning against a vote for either Clinton or Trump have been found in 119 obituaries. That’s well over 100 people who felt strongly enough to leave a scathing political commentary as part of their last words for humanity — a number so large, it trounces other contentious elections, such as the 2008 contest when candidates Barack Obama and Sen. John McCain elicited 28 such mentions.

But a great number of Sanders fans remain, for the large part, resolute in their stand against a Hillary presidency. As Eric Brooks, a community organizer and Sanders devotee, told Bloomberg, echoing countless others:

“I will absolutely never vote for Clinton.”

This article (Bad News for Hillary: Huge Percentage of Bernie Supporters Won’t Vote for Her) is free and open source. You have permission to republish this article under a Creative Commons license with attribution to Claire Bernish andtheAntiMedia.org. Anti-Media Radio airs weeknights at 11pm Eastern/8pm Pacific. If you spot a typo, email[email protected].