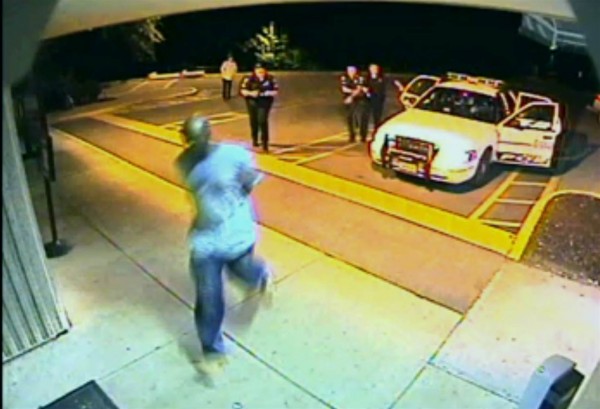 A video which shows three police officers tasing a man to death has emerged from the State of Virginia.

The victim, Linwood Lambert, was taken into custody at the Super 8 motel in South Boston, a town of about 8,000 people in Southern Virginia, after officers received a noise compliant from the hotel.

According to eyewitnesses, Lambert was taken by the officers around 5 am and the officers said they were taking him to hospital for medical treatment. The incident was said to have happened on May 4, 2013.

According to MSNBC, since Lambert was unarmed and not suspected of any crime, the officers did not arrest him. The officers thought he needed medical care, so they told him to get into their patrol car and come on a short trip to Sentara Halifax Regional Hospital. When Lambert got inside the car, he was handcuffed. The officers reportedly told him, “we are not locking you up; we are going to the ER.”

As seen in the police body cam footage, Lambert became increasingly agitated during the ride to the hospital. The video showed him asking about a light in the backseat, and then about a squad car that was trailing them. An officer told him, “you good, trust me.”

However, as the officers pulled up to the hospital, Lambert kicked out the car window, jumped out and sprinted roughly 20 feet towards the entrance of the hospital. The video from inside the car showed the officers telling him to stop. Lambert crashed into the building’s glass doors.

The officers then ran after him and began tasing him. As Lambert was still handcuffed at this point in time, his arms were unable to break his violent fall to the ground.

One officer ordered him to “stay down.” Another officer told him “Every time you get up, I’m going to pop you.” Upon hearing the word cocaine, the officers then told Lambert he was under arrest. He was accused of disorderly conduct and destruction of property. They put him back into the car and refused to send him inside the hospital for treatment.

“Act like you got some sense,” one of the officers said. Another warned “sit up or I’m going to tase you again.” The officers then proceeded to reach into the car and tase Lambert again. When the final tasing inside the car ended, the officers drove Lambert back to jail.

As the officers made the short drive to jail, their body cam showed Lambert falling unconscious. The officers noticed his state and called for emergency help.

An ambulance came and took Lambert back to Sentara Halifax Regional Hospital, the same place the officers had originally brought him for treatment.

Hospital records have revealed that Lambert was very unconscious on his arrival at 6:06 am, just over an hour after his trip with the police began. He was pronounced dead at 6:23 am. MSNBC investigations revealed that the three officers had discharged their Tasers a total of 20 times over a half-hour period. According to federal guidelines, those discharges amount to roughly 87 total seconds of potential tasing, a level capable of inflicting serious injury or death.

The three officers have been identified as Cpl. Tiffany Bratton, Clifton Mann and Officer Travis Clay. Since the incident, the South Boston Police Department has not taken any disciplinary action against the officers.

The South Boston Police Department denied the charges. The court then ordered the police department to release the full video of the incident.

This Article (Barbaric: Cops Tase Virginia Man 20 Times For Over 30 Minutes. Man Dies In Police Custody [Video]) is free and open source. You have permission to republish this article under a Creative Commons license with attribution to the author and AnonHQ.com