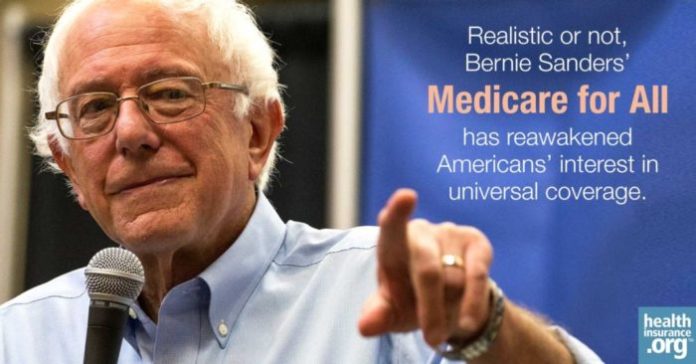 After Hillary Clinton was unduly selected for the presidential election, with a heavy heart, Mr Sanders left the Democratic Party for his Independent seat at the Senate. Sanders called for a massive shake up in the Democratic Party to restore credibility and trust among members. The Democratic establishment didn’t like him. They saw Sanders as a threat who would ruin their diabolical agenda that ensures putting their interests ahead of the rest of the American population.

Currently, Sanders is the longest serving independent member in United States congressional history. With this achievement, Sanders stands out among his peers. He is among the few Senators who the establishment can’t influence.

Although Sanders didn’t get close to becoming the Chief Executive of the White House, he is working as though he is. He is putting people first ahead of all that he is doing.

In 1976, the United States federal government started the administration of the national social insurance program known as Medicare. Currently, the federal government has employed about 30–50 private insurance companies who are running the policy. Medicare is funded by a payroll tax, premiums and surtaxes from beneficiaries, and general revenue. It provides health insurance for Americans aged 65 and older, informally known as Senior Citizens. Senior citizens should have worked and paid into the system through the payroll tax. Apart from this population category, if you are a younger American and you want Medicare, you need to have a proven disability. This of course shows that not all Americans are entitled to Medicare.

This is not how past presidents of the country who envisioned the policy wanted it to be. They wanted to roll out a policy that would cover all Americans. In 1912, Theodore Roosevelt ran on a platform of health insurance for all industrial workers as a presidential candidate for the Bull Moose Party. He offered a government-backed health insurance to workers. Although he didn’t win, this became a progressive cause for subsequent presidents.

Shortly before his death, Franklin Roosevelt proposed guaranteeing all Americans the right to health care. His successor, Harry Truman worked hard to pass a form of single-payer health insurance for all Americans. However, Truman was defeated in Congress after a smear campaign led by the American Medical Association (AMA) associated the president’s plan with the Soviet Union. Thus, Congress decided to focus on the most sympathetic part of the population. Congress agreed with the AMA because the AMA’s position was the one that could champion the interests of Congress. It is even believed members of Congress encouraged the AMA to launch the destructive campaign against President Truman. With the help of Congress, the nice policy designed to take care of all Americans was messed up. Currently, even children are excluded from Medicare.

It is therefore not surprising today that the United States continues to have the highest infant mortality rate in the industrialized world. Yale political scientist Theodore Marmore, commenting on Medicare, once wrote that no “other industrial democracy” other than the United States “has compulsory health insurance for its elderly citizens alone, and none started a program with such a beneficiary group.”

However, this mess could change if members of Congress would put away their parochial interests and think about the people. Senator Sanders of Vermont has announced he is introducing a bill that will expand the Medicare program to everybody in the United States. In fact, if the bill gets support to become law, it would wipe out the inefficiencies in the current private insurance-run system. It would give real freedom to Americans on medical care.

This isn’t the first time Sanders is attempting to make medical care accessible for all Americans. He introduced similar legislations in 2009 and 2011. Sanders’ American Health Security Act of 2009 (S.703) would have provided every U.S. citizen and/or green-card holder with health services. Of course, these bills were unsuccessful.

It is a fact that both Democratic and Republican members of Congress rely on the private insurance companies running the Medicare program for their political campaign cash. Don’t be surprised to read that Congress has rejected Sanders’ bill, after all, money runs America, not the people.

This article (Sanders Wants to Fulfill Medicare Pioneers’ Dream by Extending it to All Americans) is a free and open source. You have permission to republish this article under a Creative Commons license with attribution to the author and AnonHQ.com.