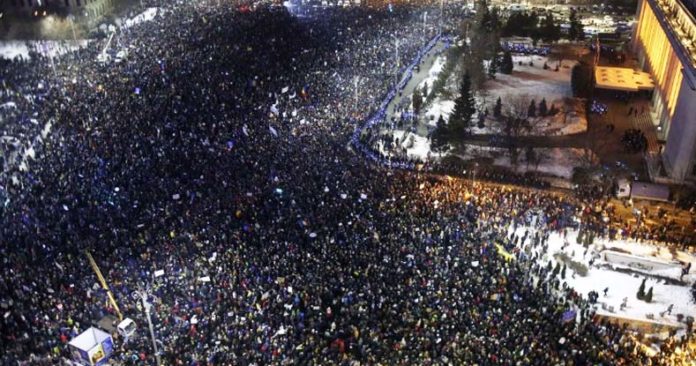 A quarter of a million Romanians holding banners, waving flags and blowing whistles and vuvuzela horns took to the streets against an emergency government decree. The decree, passed by the new Social Democrat government of Prime Minister Sorin Grindeanu – without the vote of Parliament on January 31 – decriminalizes abuse of power offences in which the sums involved do not exceed 200,000 lei ($48,000). Through the decree, which triggered the largest street protests in the country since the fall of communism in 1989, the government also wants to pardon criminals serving prison sentences of less than five years, except those convicted of sexual or violent crimes.

The decree, the government claims, aims to reduce prison overcrowding and bring the criminal code in line with the constitution. However, opponents call it a way for the Social Democrat Party to absolve officials and politicians convicted or accused of corruption.

Liviu Dragnea, president of the ruling PSD party, who has been banned by law from becoming prime minister because of a vote-rigging conviction, and who faces charges of defrauding the state of €24,000, is among those expected to benefit from the decree.

If the decree is enforced on February 10, Dragnea’s two-year prison sentence for election fraud as well as the €24,000 corruption charges will likely be dismissed, and he could become the next Prime Minister of Romania.

According to a Romanian activist:

“One of the first things the new Prime Minister and his Cabinet pushed for was to change the law concerning inmates (some of our jails are overpopulated and there are notes from the EU to do something about it) – that’s because Dragnea already is accused in another trial of defrauding the state of €24,000 and the trial is on 14th February (there are quite a few changes to the law, each one affecting different politicians but the one concerning Dragnea is raising the bar for when you can be tried for abuse of power to more than €44,000 thus annulling the above trial).”

Protesters are angry that the decree would dilute the country’s anti-corruption fight, as it will halt all ongoing investigations; prevent new ones from being launched; and end up freeing convicted officials from prison. Anti-corruption prosecutors are currently investigating over 2,000 abuse-of-power cases.

“What troubles us is the lack of transparency and also the content of the law. The changes to the penal code should not be carried out in such a manner like emergency decree,” said one protester.

“Romania is a strong democracy. People are on the streets and you cannot avoid doing the right thing,” added another.

“I want to explain to him [his 11-year-old son] what democracy means, and the way the ones who govern must create laws for the people and not against them or in their own interest,” a Bucharest protester remarked.

“I’ll come here every single day until they reverse all the measures and then leave, because we can’t accept their abuse. They acted like thieves in the middle of the night and they take us for granted,” Ionuţ Bălcescu, a 34-year-old small-business owner, told Bloomberg.

The embassies of Belgium, Canada, France, Germany, Netherlands and the United States issued a joint statement warning that Romania’s international reputation and the security of the region could be put at risk if the decree is enforced.

“This act, in contravention to the collective wisdom of the entire judicial and rule of law community, credible elements of civil society, and the demonstrated concerns of Romanian citizens over the past two weeks, can only undermine Romania’s standing in the international community and risks damaging partnerships that are based on common values, inherent in the guiding principles of the EU and NATO.”

Only after Romania’s top judicial watchdog, the Superior Magistrates’ Council, filed a constitutional court challenge to the decree; and after mass protests rocking the country for five days; followed by the European Commission warning Romania not to backtrack on fighting corruption, Romania’s government announced it will repeal the controversial decree that could have seen some corrupt officials escape prosecution. In a televised statement on Saturday evening, Grindeanu said:

“Tomorrow [Sunday], we will hold a cabinet meeting to repeal this decree. I do not want to divide Romania. It can’t be divided in two.”

This article (The Biggest & Longest Protests since the fall of Communism Plunge Romania into Chaos) is a free and open source. You have permission to republish this article under a Creative Commons license with attribution to the author and AnonHQ.com.