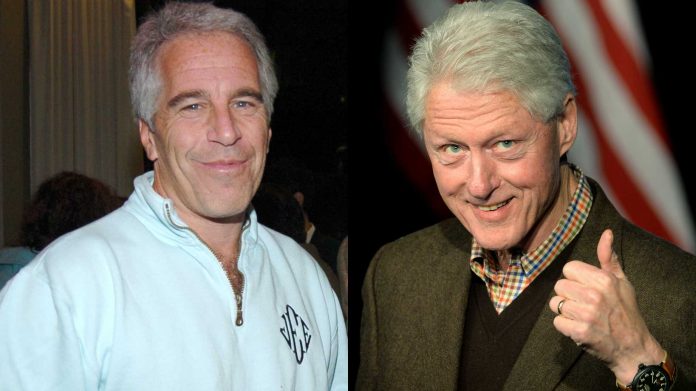 The Jeffrey Epstein saga has been going on for years, anybody who is interested in who he is will quickly find out many shady facts, one of them being the fact that he is a registered sex offender.

Apart from being a sex offender, there are many victims who have come forward over the years claiming that he abused them, many of whom are under age. One example, out of many is Virginia Roberts Giuffre, pictured here with Prince Andrew, who seemed to have a very close relationship with Epstein just like the Clinton’s, and many other powerful people, Roberts claimed that Epstein abused children as well as loaned them out to many of his famous friends, including Prince Andrew.

Over the past few years alone, an abundance of evidence has come out that really show how deep this type of activity goes, from your favourite actors and actresses all the way into politics, through the military-industrial complex and into the financial elite, royal families as well as the Vatican. The last article I wrote on this subject dealt with child-pornography sharing by hundreds of employees and people connected to the Pentagon. You can read more about that here.

I also recently wrote about the NXIVM case and all of the connections it has to powerful people in the form of the financial elite as well as politics. You can read those articles here and here.

The latest news regarding Epstein was that he was arrested and taken into federal custody and is expected to appear Monday in Manhattan federal court. He has been in and out of court for years, dodging a number of charges. This time, he’s been arrested for child sex trafficking. A message was sent to Epstein’s defence lawyer seeking comment. Epstein is being held at the Metropolitan Correctional Centre in Manhattan, according to the Federal Bureau of Prisons website.

Specifically, it deals with the sex trafficking of minors in both New York and Florida between 2002 and 2005, he is expected to appear in court tomorrow.

The arrest was made by the FBI-NYPD Crimes Against Children Task Force, and it comes almost 12 years after Epstein didn’t receive any penalty except a slap on the wrist for supposedly molesting and raping children in Florida.

According to the Daily Beast:

The new indictment—which, according to two sources, will be unsealed Monday in Manhattan federal court—will reportedly allege that Epstein sexually exploited dozens of underage girls in a now-familiar scheme: paying them cash for “massages” and then molesting or sexually abusing them in his Upper East Side mansion or his palatial residence in Palm Beach. Epstein will be charged with one count of sex trafficking of minors and one count of conspiracy to engage in sex trafficking of minors—which could put him away for a maximum of 45 years. The case is being handled by the Public Corruption Unit of the Southern District of New York, with assistance from the district’s human-trafficking officials and the FBI.

Several of the billionaire’s employees and associates allegedly recruited the girls for Epstein’s abuse, and some victims eventually became recruiters themselves, according to law enforcement. The girls were as young as 14, and Epstein knew they were underage, according to details of the arrest and indictment shared by two officials.

David Boies, the attorney for Virginia Roberts (mentioned earlier in the article) saidthat “it’s been a long time coming, it’ been too long coming it is an important step towards getting justice for the many victims of Mr. Epstein’s sex trafficking enterprise.”

The Jeffrey Epstein case has been the most prominent of many examples that prove how America has a two-tiered Justice system, and that people that are wealthy and well-connected will be shielded from prosecution or given lighter sentences. But perhaps this is all changing? While the implication is that our justice system is indeed rigged and controlled by the Deep State, we may just be arriving at the stage of our ‘Great Awakening’ when we are actually ready to ‘handle the truth.’ We are certainly not as naive about what is going on behind the scenes as we once were, even in the recent past. And there seems to be a new energy around that is now supporting the search for truth.

There are more than enough examples showing how many of the people we idolize, vote for, and regard as stars, philanthropists, religious and political leaders are heavily involved in the trafficking and ritualistic abuse of men, women and young children. It’s quite overwhelming, and anybody with a clear head on their shoulders who dives into this topic will see what everybody else who is diving into it is seeing, that it’s real and far from a conspiracy.

That said, many are still in disbelief that this type of thing has been ongoing without any end for many years. The reason for that is because this entire network politics, the courts, governments and so forth. WE work for them and they are above the law.

Moves like this represent a shift in humanities consciousness where we are ready to see who are ‘leaders’ truly are and why there is a need to awaken to our individual sovereignty and personal empowerment.