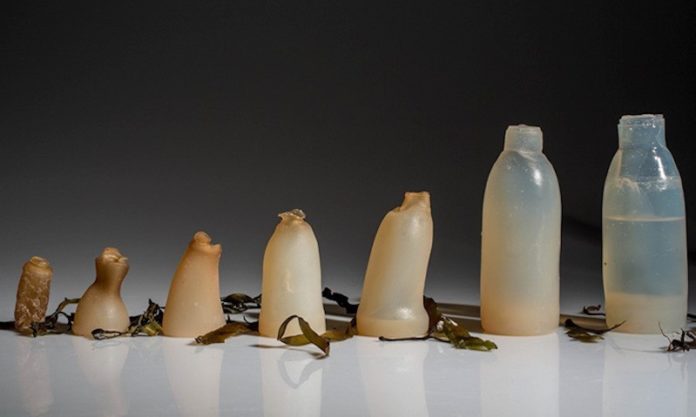 The average American alone buys approximately 167 plastic bottles of water annually. Global sales have been estimated to be around 60 billion dollars annually. But where does all this plastic go? The majority of us can recycle, and have the facilities available to do so. Unfortunately, America throws away 35 billion plastic bottles every year, to which the majority goes into landfill, and overspills into the surrounding environments.

We have previously mentioned the plight our oceans face when it comes to plastic; fortunately, some of the best minds, innovators, environmentalists and scientists have worked towards cleaning and eradicating plastics that litter our world.

Icelandic product designer Ari Jónsson has invented a 100% natural and 100% biodegradable water bottle made of algae. Jónsson stated “I feel there is an urgent need to find ways to replace some of the unreal amount of plastic we make, use, and throw away every day. Why are we using materials that take hundreds of years to break down in nature to drink from once and then throw away?”

The product is made from an algal derivative called agar. Agar made its way into microbiology labs in the late 1800’s, and has been used ever since for culturing microbes for study. Agar is also regularly used in the vegetarian and vegan food industry, providing a substitute to gelatin in deserts.

Jónsson’s idea involved mixing an agar powder with water to produce the agar gel-like substance. The gel is heated and poured into a cold, bottle shaped mould, before being swirled inside an icy container. After a few minutes of refrigeration, the agar solution sets and the bottle is formed and ready for use.

The bottle retains its shape, but when emptied or the contents inside is consumed, it starts to break down and degrade. Like hemp, algae are an all-natural alternative to plastic. Jónsson states that consumers can even chow down on the bottle if they enjoy the taste.

Jónsson’s algae bottles were presented at the Drifting Cycles student exhibition during DesignMarch, earlier this year. The product is still a concept thought, but has a great potential to assist in the fight against plastics.

This article (Biodegradable Algae Bottles Could Provide Alternative To Plastic Water Bottle) is a free and open source. You have permission to republish this article under a Creative Commons license with attribution to the author and AnonHQ.com.