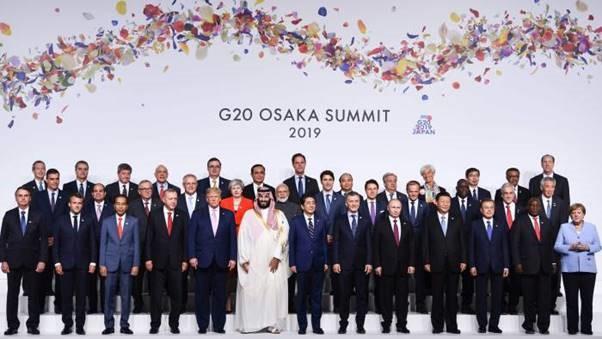 (Zero Hedge) Sometimes you just have to laugh.. The news a planeload of Brazilian sherpas heading to the Osaka G20 meeting was carrying industrial quantities of cocaine says everything. That’ll spoil the Saturday night party..

Or how about hints EC President Jean-Claude Junker will stay on the Brussels Throne to oversee Brexit (because the EC blundership can’t agree on a successor.) The Putin interview in the FT is a must read – Liberalism is dead (actually he said “obsolete”), and Trump is a great populist. How about the group photo for the G20 – looks line a line up for a Tarantino film… Brad Pitt as MBS?

Trade is Trump’s Thumpin Top Topic in Osaka. Today he’s been lecturing India and Japan about how its fine for him to threaten protectionism, pull defence treaties, and to ignore long accepted trade rules, but heaven help some poor country that dares to question. India’s Modi warned about the “one-sided decisions” threatening the global economy. I bet that went down well. I would love to be a fly on the wall when Macron meets Trump and starts berating him about climate change. More about G20 below.

Back in the real world, perhaps the most interesting news is Jony Ives departure from Apple. Despite my periodic rants at Apple: “My Name is Bill, and I am an Appleholic.”

In my pocket is an iPhone, an iPad in my bag, and as soon as I finish the Porridge I’ll be using my Macbook and to record this week’s Podcast on Garageband which I will post on iTunes.  There is an Homepod in the flat, and iMacs in both our home offices. Yet, I have to admit, I’m pretty rubbish when it comes to making them work. I don’t find them easy – I’m far more at ease with my bog-standard office PC.

So why I am a sucker for Apple? Because they look and feel great. They have quality. They feel special. They are design classics. Which is why Apple’s head of design leaving should be a big issue. Enough to tip the company? Stock move down a $1 y’day says no, and does design matter to a company that is now about Apps and Services? Well it should – because the same apps and services are available in lots of other formats and places – and if Apple is no longer Iconic, then I wonder how long its worth about a Trillion dollars…

But, even Apple is a mere distraction today.

Today is all about waiting for tomorrow. Trump and Xi will meet to discuss trade tomorrow morning. Actually, they will meet to discuss how to resume trade negotiations. It’s highly unlikely anything will be settled – Trump will demand further Chinese assurances and pledges on IP, while Xi will sit there, politely re-iterate everything China is doing and its legislative process, and seethe. The markets will be looking at the nuances of what is said, and what the notes and communique’s say. My bet is we will still see a load more tariffs dumped on Chinese exports next week. (If Trump wants to cause a scene, then bringing up Hong Kong will do it.)

The likely fallout from the Trump/Xi meetings could be fairly muted. If we get no progress, then market will soften on the protectionist recessionary threat, but expectations of Fed Ease will rise putting a clear floor on downside. Anything positive from the meeting will be a bonus. We’re already into the summer season and stock market volumes are tiny, and vol muted.

Maybe, we are looking in the wrong place. The whole world is focused on two world leaders meeting in Osaka tomorrow morning. Maybe we should be watching the Gulf and Iran instead?